You’ve probably heard of the G-spot, but maybe not the M-spot. My hunch is you’ll hear a lot about it from anyone you know who sees “The M Spot” at New Jersey Repertory Company.

For starters, the M-spot is located in the same general area as the G-spot, but in Michael Tucker’s play about sex-and-marriage-and-sex, the M outranks the G on the satisfaction scale, despite what you might have heard. Metaphorically, in fact, M might well be the gateway to G.

The first act alternates monologues between long-time married couple Jerry and Maddie, played by long-time married couple Tucker and Jill Eikenberry. The somewhat repetitious solo turns, at first amusing (his more than hers), become very personal. The act concludes in a two-scene that centers on their interest (his more than hers) in spending a week-end at a sex-therapy resort.

Act two finds Jerry and Maddie at the resort, where he is on a pre-massage wine-run, and she is confronted by early-arriving masseuse Star (Pheonix Vaughn), whose New-Age values turn out to be life-changing. Superbly acted by Eikenberry and Vaughn, the relationship between the two women develops over a half-hour from a cautious introduction to a true bonding. Within the scene, brief total nudity is staged and enacted so naturally as to negate any hint of prurience and, indeed, reveals as much about the clothed character as the un-clothed one. (That the intimate, female-centric scene is so well written by Tucker and gracefully directed by Evan Bergman says a lot about both men.) 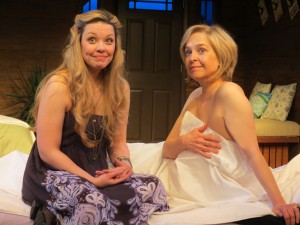 Jerry returns, only to be baffled: What to make of Star’s presence and Maddie’s transformation? What emerges will not be revealed here, except to say that the resolution is totally believable, and that the last few moments – and spoken lines – are perfection.

I asked Tucker what prompted his first-ever written play. When original writers of “L A Law” left that show after the fifth season, he told me, they were replaced by writers charged with maintaining the tone of the ongoing series. In the belief that “there’s no drama in a happy marriage,” they wrote-in the divorce of the married characters played by Tucker and Eikenberry.

Later, the real-life married couple spent some time exploring self-realization sessions at various sites in Northern California. (Where else?) Those experiences, and the fictional “divorce,” inspired “The M Spot,” which debunks those writers’ faulty rationale in no uncertain terms.

“Guadalupe in the Guest Room” is about the complexities of communication across cultural and language gaps. That element of Tony Meneses’ play, world-premiering at Two River Theater, is uniquely constructed. When the characters are speaking in Spanish, they do so in English so we can understand (clarification below*). “Guadalupe” is also about coping with loss and the nature of grief, and as such it cannot be faulted – or even questioned – because passing judgment on anyone else’s grieving process is an affront.

Guadalupe (Socorro Santiago) emigrated from Mexico to be with her Mexico-born daughter Claudia and her Anglo son-in-law Steve (Charles Socarides) during Claudia’s illness. After Claudia’s death, she and Steve struggle to provide mutual comfort. While both are well-meaning, it’s no picnic. For one thing, there’s the lack of privacy, illustrated by Guadalupe coming upon Steve in a couple of mild romantic indulgences: one with himself, which embarrasses her, and one with Claudia’s former colleague Raquel (Deonna Bouye), which upsets her. 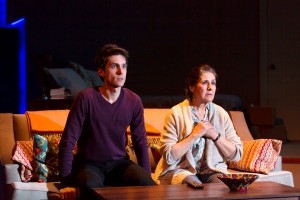 In his distraction, Steve is inconsiderate and condescending to Guadalupe, while she goes about performing house-care duties, some of which Steve finds intrusive, to put it mildly. (His reaction to her compulsive bed-making is to shout “What the f**k!” in her face, a gratuitous outburst he repeats later. Grief-induced, yes, but it strains credulity.)

Guadalupe and Raquel are translating, into Spanish, Claudia’s English-written children’s books, while Mexican gardener Roberto (Alfredo Huereca), develops an interest in Guadalupe while tending to the lawn.

Guadalupe is engrossed in Spanish-language TV soap operas, known as Telenovelas, to which Steve becomes addicted as well. The TV characters come alive, mirroring real life in a light-hearted way. Perfectly enacted by Bouye and Huereca, they are spot-on funny parodies, but their point is well made. A little bit of silliness makes this medicine go down.

With the exception of Steve’s outbursts and the Telenovela scenes, the tone, in keeping with Daniella Topol’s direction, is low-key, sometimes to a fault. To be sure, this is a bereaved household, but under-playing that quality courts ennui. Ms. Santiago’s Guadalupe is reserved throughout, and, excepting those outbursts, Mr. Socarides leans on the young widower’s gloom. Mr. Huereca excels at expressing Roberto’s quiet emotion in playwright Meneses’ fine, quasi-poetic passages, and Ms. Bouye, whose enlightened Raquel contrasts with traditional Guadalupe, is a standout. (She’s also a first-class quick-change artist!)

When asked how she got Claudia’s classroom job, Raquel, eschewing euphemism, says “She died.” Being able to state that simply is a major step in the grieving process. Having one character say it to another one who as yet cannot is perceptive play writing.

*About the Spanish/English: Much of the dialogue is spoken and heard by Guadalupe and other characters in Spanish (the Guadalupe/Roberto conversations, for example, would be en espanol ), but it is delivered by the actors in English. It takes a few minutes to catch onto, but it works.
___________________________________