There’s a lot more to “Absurd Person Singular” than just the comedy. In what qualifies as sub-text, Alan Ayckbourn’s play explores different social-class relationships, intra-marriage dynamics and the significance of economic disparity, but on the surface, especially as played at Two River Theater, it’s one of the funniest damn plays you’re ever liable to see.

Three couples gather in a different one of their kitchens on three consecutive Christmas Eves. “Last Christmas” opens in the kitchen of burgeoning real estate developer Sidney (Brooks Ashmanskas) and his compulsive-cleaner wife Jane (Melissa van der Schyff), who get the ball rolling with a quarter hour of hilarious verbal and physical antics. 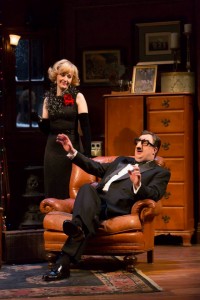 The first guests to arrive are stuffy banker Ronald (Michael Cumpsty), from whom Sidney is seeking a business loan, and his pretentious wife Marion (Mary Birdsong), who wants nothing more than to cut the visit short. Next are pill-popping Eva (Liz Wisan) and her job-seeking architect husband Geoffrey (Scott Drummond), whose knack for peeping up skirts involves the scattering of cocktail snacks.

Act two, “This Christmas,” finds the three couples in Geoffrey and Eva’s kitchen, where, through a series of interlocking mishaps, chaos erupts while Eva quietly goes about devising ways to kill herself. (I know, suicide is no laughing matter; but Ayckbourn’s farcical treatment makes it so.) Act three, “Next Christmas,” is at Ronald and Marion’s, where one of the couples, uninvited, crashes the party in an outrageously funny scene that defies description. 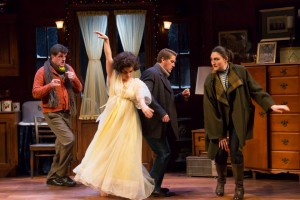 There is no more skilled comedic actor than Ashmanskas. How he says what he says and how he moves when he moves are inventive perfection. His Sidney and Ms. van der Schyff’s deliciously flighty Jane are a well-matched and mis-matched couple all at once. (See it to believe it.) Cumpsty plays propriety as well as anyone ever, an understated technique that propels his extended second act sight gag into the comedy stratosphere. Ms. Birdsong’s Marion personifies a banker’s wife, steeped in haughty elegance, while Wisan and Drummond find a wistful undercurrent in the youngest couple’s marriage.

The structure of “Absurd Person Singular” invites discombobulation, but director Jessica Stone will have none of that. She has staged the play for its maximum visuals and brought out the very best in her dream cast. And a major Bravo to designer Charlie Corcoran, whose three functional kitchens are revealed on Two River’s impressive revolving stage to the tune of Blood Sweat and Tears’ “Spinning Wheel.”

The end of Ayckourn’s play points up his themes of class differences and the potential mis-use of financial power. But not to worry; there’s no forfeit if you don’t catch that (or don’t want to). Laughing yourself silly is reason enough to see “Absurd Person Singular.”