Oh, THAT Pamela! (Take the quiz)

“Swimming at the Ritz,” the play having its U. S. premiere at New Jersey Repertory Company, is about Pamela Churchill Hayward Harriman, of whom you might have heard (if you’re older than 50). The following quiz might help you decide whether or not to see it.

3) Leland Hayward:
a) Coined the phrase “The Great White Way”
b) Produced “Mr. President” on Broadway
c) Wrote “Rosebud: A history of the Winter Olympics”
d) Was married to Leslie Howard

5) Pamela Churchill Hayward Harriman:
a) Was Winston Churchill’s mother*
b) Was married to 3 of the 4 above
c) Admired Aly Khan’s love-making prowess
d) All of the above

If you picked b) to the first four and d) to number five, “Swimming at the Ritz” might just be your flute of Moet (and you’re probably over 50). The play is a retrospective of Pamela’s life (1920-1997), her three marriages and her numerous extra-marital affairs (Edward R. Murrow among them).

Pamela achieved a measure of reflected fame through her husbands and her paramours. She was a prodigious Democratic Party fund raiser, rewarded by President Clinton in 1993 with the Ambassadorship to France. Her legal battle with Harriman’s children over his estate was tabloid fodder in the mid-90s, but despite Leipart’s efforts to burnish her legacy, she remains a footnote to history.

“Ritz” is set in that Paris hotel’s suite (Jessica Parks’s perfect design), where, heavily in debt, Pamela is contracting with Christie’s auction house for the sale of her possessions (and where she later died after suffering a stroke while swimming in the pool). 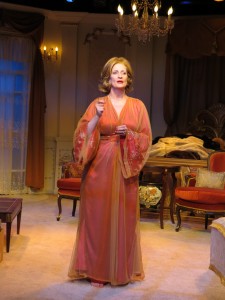 The play is little more than an autobiographical narration, but Leipart is blessed with Judith Hawking’s terrific performance. To say she carries the play is an understatement; she is the play. Hawking, who actually bears a resemblance to her character, mines a good deal of humor and a degree of pathos. She also has fun with forays into prurience, and in what we can assume depicts her character’s, um, skills, she gives a master class in seductive flirtation. Under SuzAnne Barabas’s adroit direction, Hawking holds attention throughout, even when the repetitious material lags. 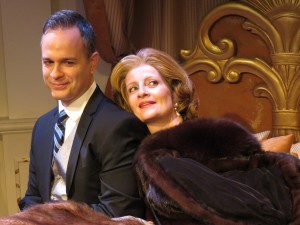 Christopher Daftsios is fine as an Italian valet who listens to and sympathizes with Madame – and who spares Ms. Hawking the burden of a two-hour monologue. Already overlong (one 90-minute act would suffice), the play doesn’t know when to end. Twice it wraps up naturally, only to be resurrected with extraneous detail. Pared down and tightened up (and with Judith Hawking on board), “Swimming at the Ritz” could have a life beyond Long Branch.

*Pamela was indeed the mother of a Winston Churchill. Her son with Randolph Churchill was named for his grandfather.