Over the last few years, stage musicals that happen in New Jersey don’t necessarily stay in New Jersey. At least not if they’ve happened at Paper Mill Playhouse, where the Broadway re-re-revival of “Les Mis” premiered in 2010, where “Newsies” was born in 2011 and where Broadway’s newest smash hit “Honeymoon in Vegas” first saw the light of amber gel in 2013. (Last year’s Paper Mill revival of “Can-Can” is rumored to be crossing the Hudson River soon.)

With much of the principal cast intact, the “Honeymoon in Vegas” move from Millburn NJ to the Great White Way is a felicitous one. Adapted from the 1992 movie (James Caan, Nic Cage, Sarah Jessica Parker et al), the book by Andrew Bergman, who directed the movie, still skirts the ick factor, but the performances are a notch sharper and Jason Robert Brown’s show-tune score sure is Broadway-worthy. His catchy tunes, clever lyrics and hip arrangements more than justify the 15-piece on-stage orchestra. 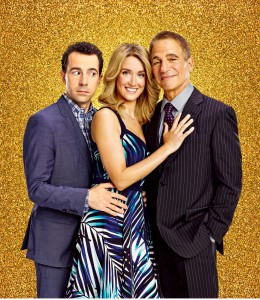 New Yorkers Jack (Rob McClure) and Betsy (Brynn O’Malley) decide to get hitched in Las Vegas, where he promptly loses 58 grand in a rigged poker game to slickster Tommy Korman (Tony Danza), who bargains for a weekend with Betsy to cancel the debt and spirits her away to Hawaii. The ensuing goings-on include enough twists and turns to keep things lively, including hula girl Mahi (perky Catherine Ricfaort)’s attempts to seduce Jack into a euphemistic “Friki-Friki” encounter and a troupe of “Flying Elvises,” whose second act number is amusing, if overlong by half. 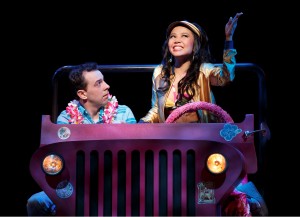 Hard to resist a “Friki-Friki” (Rob McClure and Catherine Ricafort)

The story tests the limits of disbelief. For starters, we must accept that doofus Jack would agree to trade off his fiancée to settle his debt, and also that Betsy, who’s no doofus, would agree to the arrangement. The scenario is glossed over when mobbed-up Tommy assures the couple that he doesn’t expect any hanky-panky, just platonic companionship. Which, given the slightest thought, is the least believable factor of all.

But they carry it off. McClure and O’Malley play naïve innocence to a tee (and sing like Broadway stars are meant to), and Danza is so ingratiating that Tommy stays likeable through all his double-dealing. In fact, the show’s undisputed highlight is Danza’s stylish song-and-dance number, “A Little Luck.” In defiance of expectation (and of age), he syncopates the lyrics to perfection and polishes it off with a slick tap routine.

With Gary Griffin’s fast-paced direction and flashy choreography by Denis Jones, both from Paper Mill, as is conductor/musical director Tom Murray (three feathers in the Jersey venue’s cap), “Honeymoon in Vegas” is the quintessential tourist-magnet musical. Not that there’s anything wrong with that. If only tourists can enjoy a splashy Broadway musical, with top talents, terrific tunes, sexy showgirls, that swinging band and Tony Danza’s nifty star turn, count me among ‘em. “Vegas” is a sure bet. 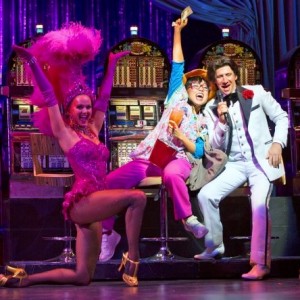