Fortunately for the production budget of “The Wayside Inn,” all the rooms in the play’s eponymous motel are laid out the same, which allows several character studies to play out on the same set – sometimes at the same time. The play is maybe a six, but the device with which it unfolds is a solid nine. (That revelation might be a spoiler, but it’s clear five minutes in.)

According to his Playbill bio, A. R. Gurney “has been writing plays for many years.” Talk about understatement! Now pushing 84, “Pete” Gurney’s bibliography includes about 50 titles, including “Sylvia,” for two years in the 1990s the most produced play in the U.S. His two-hander “Love Letters” is currently enjoying a starry Broadway revival. “The Wayside Motor Inn” dates from 1977, which explains its cautious, somewhat dated attitudes, but by intermission, the disparate characters and their situations that unfold in the single-set/multiple-set motel room have captured your interest. 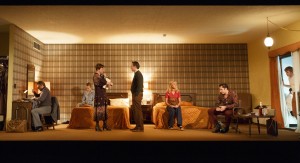 If there’s a unifying theme, it’s the inability of couples to communicate effectively. Late-middle-aged Frank and Jessie, in the area (outside Boston) to visit their new grandchild, might as well be on different planets regarding his health issues, while overbearing Vince knows little and cares less about his son Mark’s wants and needs. (What’s clear but unstated about Mark cements the action in the 1970s.)

The first-act setups are un-histrionic, but not uninteresting. Gurney gets flashier in the second act, in ways that open up the action but provide few surprises. While most of the plot resolutions are predictable, watching director Lila Neugebauer’s effective traffic-copping in that motel room – oops, those motel rooms – is reason enough to check into “The Wayside Motor Inn.” Through Oct. 5 at Signature Center, 480 West 42nd Street, NYC. Info and tickets: 212-244-7529 or online at www.signaturetheatre.org

I met Paul Barry in March 1963 when he was the Company Manager of an off-Broadway play and I ran the box office. We bonded quickly and he offered me a job as actor and PR man at the resident stock company he was opening that summer in Cape May, New Jersey. I was soon elevated to Associate Producer (a-SOCK prod, we pronounced it), a position I held through several seasons.

In ’63-64 we founded the New Jersey Shakespeare Festival together. I did much of the legwork, meeting with attorneys, shuttling paperwork back and forth and becoming, in fact, the first president of the non-profit incorporated Festival. But make no mistake, Paul was the driving force behind its founding.

After a brief period of estrangement in the late ‘60s, during which Ellen Reiss Barry became his full-and-unquestioned Festival – and life – partner, Paul and I re-connected and became even closer friends than we’d been before. 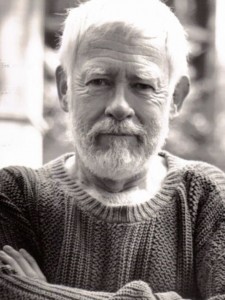 The list of Paul’s accomplishments is long and illustrious. Besides the Festival, still in operation (as the Shakespeare Theatre of New Jersey), he directed and/or appeared in plays at the Kennedy Center in D.C., Asolo in Florida and the San Francisco Shakespeare Festival, among other venues, and also fight-choreographed for Joe Papp at the New York Shakespeare Festival.

Paul was the first American to direct every one of Shakespeare’s 39 plays, a record he chronicled in “A Lifetime with Shakespeare” (Must-reading for directors, actors and students of The Bard, published by McFarland & Company Inc.).
Paul’s legacy includes having provided hundreds of weeks of work for countless professional actors, stage managers and technicians, each of whom probably has a favorite memory.

His gift to me remains one of the most important facets of my life. At our final get-together, holding hands as we lay on his bed together, I whispered into his ear my thanks for instilling in me my love of Shakespeare.

That was two weeks to the day before Paul died on September 11.