French dramatist Jean-Baptiste Poquelin (better-known as Moliere)’s plays marked the beginning of modern French comedy. Moliere went beyond Commedia dell’ Arte stereotypes, creating characters and situations audiences could identify with rather than just observe. Two River Theater Company’s well-conceived production of his first success (in 1662), “The School for Wives,” is as involving as it is entertaining.

Moliere’s plays, like Shakespeare’s, travel well (if not always advisedly). This “School for Wives” is set in 1959, and why not? Its themes of gender roles, jealousy, lust and such have survived the 300-year gap and will the next 300 as well.

In an effort to mold his perfect wife, Arnolphe (Robert Stanton, underplaying to excellent effect) arranged for his ward Agnes (Phillipa Soo, ditto) to be reared from the age of four in a convent “far from the haunts of man” so that she’d emerge totally innocent at marriageable age. (That she thinks babies are “begotten through the ear” is a stretch, but it makes the point.) 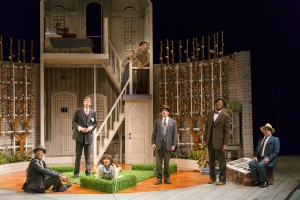 The cast of “The School for Wives” (Photo: T. Charles Erickson)

Arnolphe then installs Agnes in his country house, isolating her from outside contact, a condition entrusted to a pair of bumbling servants, played with delicious deviltry by real-life sister and brother Bree Elrod and Carson Elrod. Inevitably, Agnes encounters a young swain, Horace, and experiences stirrings of the non-aural variety.

Unaware that Arnolphe is Agnes’s virtual captor, Horace reveals his courting plans to the man, leading to some of the play’s funniest exchanges. (Horace denounces the “jealous idiot…old fool” while Arnolphe frets “Oh, death” and “What a bitter pill…” in asides.) Thanks to some late-revealed coincidences, a common technique among classic comedies, the play wraps up as you might expect.

Two River side-stepped the potential ick factor (significantly older man lusting after a teen girl) by casting the relatively young Stanton, whose lanky frame and elastic countenance are all the props he needs. A foolish and unrealistic Arnolphe is more palatable than a lecherous one. Ms. Soo’s Agnes is genuinely sweet and certainly innocent. Her reading of the repressive “Maxims of Marriage or The Duties of a Married Woman,” forced on Agnes by Arnolphe, is remarkably poignant, and one cheers when she later proves that in matters of the heart, “A foolish girl can best the wisest man.”

Korey Jackson is a robust Horace, saved from despair by those last-minute coincidences. Steven Rattazzi’s turn as an over-the-top Notary (a Moliere fixture) earns his exit applause, and Billy Eugene Jones and Keith Reddin lend able support as friends of Arnolphe.

Mark Wing-Davey directs with a firm hand. The realized characters are flesh-and-blood and the pace is quick. Moliere’s play, masterfully translated by Richard Wilbur, is in rhyming couplets, which can become sing-songy, but not here. The dialogue flow is such that when the rhyming does become obvious, it’s a special delight. (Adding the presence of a character who is only mentioned in the play – and as deceased at that – is a distraction, as is an extraneous wordless coda that defies analysis.)

David Gallo’s set makes excellent use of the revolving stage. The exterior is like a gingerbread creation; inside is a pleasant garden and enough doorways to accommodate a farce.

Some of the speeches are lengthy and complex. “How could they memorize all that?” someone exclaimed on opening night. Well, they could, so get yourself to “The School for Wives” and be glad they did.

Don’t expect to see Dan Lauria as Willy Loman or Richard III any time soon. “I don’t do plays by dead white guys,” he has said, “only new plays.” Now, as if to cement his point, Lauria, Kevin Arnold’s indelible dad on “The Wonder Years,” has written his own new play in which he’s starring at New Jersey Repertory Company. And what is “Dinner with the Boys” about? Dead white guys, two of whom die in the course of the play in gruesome fashion. The disposition of their bodies is discussed at length, as are reminiscences about past mobster hits and the morality of whacking women as opposed to men. Did I mention that “Dinner with the Boys” is a comedy? 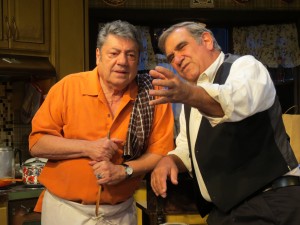 Charlie (Lauria) and Dominic (Richard Zavaglia), refugees from a bungled “assignment,” are hiding out in a house in New Jersey, where gourmet-cook Dominic keeps the pair well fed in designer/decorator Jessica Parks’s remarkably realistic and functional kitchen setting. The two men banter about the old days, with Zavaglia’s restrained Dominic musing about opening an Italian restaurant while Lauria tests the limits of the auditorium’s acoustics.

When two mob enforcers (one Italian, then Jewish, both well-acted by Ray Abruzzo) show up to ostensibly finish off the boys, the plot – and Dominic’s tomato sauce – thickens. To say much more would be, in the face of Mr. Lauria’s popularity, redundant. Let’s just say that “Dinner with the Boys” is an intermittently amusing mash-up of “The Odd Couple,” “Goodfellas” and “Sweeney Todd.”

Customarily, NJ Rep producer Gabor Barabas asks audiences to pass the word about his shows. Last week he changed his tune: “No need,” he joked. “Every seat is sold for the entire run. You can forget you were even here.” Okay.
Through Oct. 12 with performances Tues-Sun. Schedule and ticket information: 732-229-3166 or at njrep@njrep.com