I feel about Theresa Rebeck’s plays the same as I do about Woody Allen’s movies: the good ones are really good and even the minor ones are very much worth seeing. Rebeck’s distinctive “Mauritius,” on Broadway in 2007, is on my 10-best list, and the lesser “Bad Dates” was likable enough that same year at Two River Theater in Red Bank.

“Poor Behavior,” at The Duke on West 42nd Street, falls somewhere between those two. It’s got some rough edges, but featuring Rebeck’s characteristically natural dialogue and buoyed by top-drawer acting, the play is an absorbing sit-through.

Ian and Maureen are guests at the weekend cottage of Peter and Ella, where things do not go swimmingly. We’re in the midst of a verbal battle from the get-go, with Ian, stoked by too much wine and sublimated hostility and desire (sometimes indistinguishable), leading the charge against the concept of “good.” 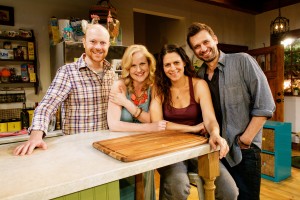 None of the four is blameless for the emotional bloodbath that develops, but Ian emerges as the poster boy for poor behavior. He’s conscience-challenged, as in not having one, but slick characters like Ian tend to draw people in, and acted brazenly by Brian Avers in a disarming Irish brogue, he does just that.

Maureen goes in and out of, if not sanity, at least self-control. Her meltdown, acted full-out by Heidi Armbruster, made me shudder for the character.

When does a mistaken belief that something happened justify a ‘may as well do it’ attitude? Peter and Ella are brought down by that concept; Jeff Biehl and Katie Kreisler play them with compassion that makes the couple’s unraveling the more upsetting.

Each character has one or more singular “moments,” but under director Evan Cabnet’s sure hand, they are a true ensemble, thoroughly at home on Lauren Helpern’s functionally detailed kitchen-dining set. 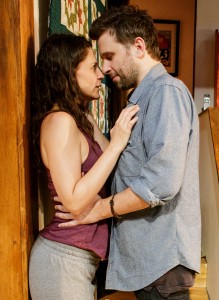 Rebeck has a way with words, which is less obvious and more complimentary than it may seem. Consider a ‘rule’ imposed during the heated argument that starts the play: “God is off the table.” A reference to, of all things, lard, is amusing, and “What’s bad about not having kids is that you hafta hang out with others who don’t have kids” is deeper than it seems. Also, let’s hear it for Rebeck’s restrained use of the f-word, uttered only once in the first act – and to excellent effect.

The conclusion of the play hinges on a melodramatic occurrence (and a “Wait Until Dark” token), but it’s not out of the realm of possibility, and the ultimate disposition of the four-way relationships remains open to interpretation. With plenty of talk (and a little action) about marital infidelity, a startling frying-pan attack, four juicy roles and one set, “Poor Behavior” is sure to have a life after off-Broadway. Look for it at your friendly neighborhood regional theater.

[File this under “Six Degrees”: April 14, 2005…Vanessa Trouble and me at the 3rd-floor bar at Angus after seeing “The Pillowman”. Jeff Goldblum walks by on his way to the front window table. I say “Nice work in your play” as he passes. Unexpectedly, he stops and asks what we liked about the play and his performance. After about ten minutes we shake hands and he goes to the table to join his friends – Billy Crystal and Robin Williams.]