Seeing “Lucky Me” in Long Branch? Lucky you.

In Theatre of the Absurd (capital A), accepted stage conventions are largely abandoned in order to present a view of the world as meaningless and incomprehensible. Robert Caisley’s “Lucky Me,” premiering at New Jersey Repertory Company, doesn’t exactly fit that description, but its odd characters, out-of-the-blue developments and breakdown of communication bring it right up to the edge. Call it theatre of the absurd (small a).

Contrary to the title, Sara Fine (Wendy Peace) is in her 22nd year of an odds-defying run of bad luck. Escorted home from the emergency room with a foot-bone fracture (suffered in yet another fall from the roof) by her neighbor Tom (Michael Irvin Pollard), Sara’s not surprised (Tom is) to discover that every light bulb in her apartment is burned out. Fortunately, she maintains a supply of 4700 fresh bulbs against that recurring misfortune, one of many that include short-lived goldfish, a roving roof-leak, periodic window-shatterings and more serious mishaps that are hinted at as the play progresses. 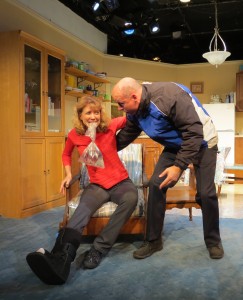 Sara shares the apartment with her blind father Leo (Dan Grimaldi), whose resentment of Tom, whom he insists on calling Brad, grows in direct proportion to Tom and Sara’s increasing fondness for one another. Tom, whose occupation as an airport TSA agent is fodder for some of Leo’s tastiest jibes (“…further limitations on lotions and unguents?”), is tolerant of the cranky old man, accepting even a drink dunked in his lap with relative equanimity.

The fourth character is Sara’s landlord Yuri (Mark Light-Orr), who has Leo figured out. “You divide by three,” he says. “One-third is true, one-third is not remembered and one-third is bullshit.” (At least.)

Sara is not sure if committing to Tom is a good idea – for either of them. She’s a gentle soul: not quite of this world, accepting of her misfortunes but emotionally vulnerable. Ms. Peace captures her in a warm, delicate performance. Mr. Grimaldi does blindness as well as I’ve seen it played. He looks toward the others without eye contact, acknowledging their presence based on his other heightened senses (maybe). The indeterminably accented Yuri would be at home in a capital-A Absurd display of wit; Mr. Light-Orr acts him with droll detachment. 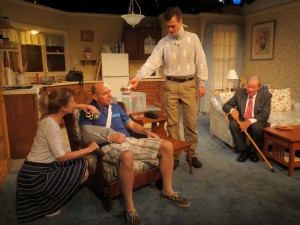 Director SuzAnne Barabas’s familiarity with the playwright serves them both well. (She directed his “Happy” at NJ Rep last year with three of these same actors.) She shares Caisley’s ear for tart exchanges (“You promised to be nice, dad.” “That doesn’t sound like something I would say”), and his characters’ quirkiness (dad exits only to phone in from an offstage room).

At well over two hours, including intermission, the play is drawn out, and filling in storyline gaps via a lengthy one-way phone monologue near the end is a device unworthy of the playwright. However, this is one of several contemporaneous premieres, where seeing the play on its feet is intended in part to facilitate tweaking. Mr. Caisley could not ask for a more polished staging to guide his efforts.