My Shakespeare-scholar friend dislikes the term “accessible” to describe productions that de-mystify some of the more complex texts. That judgment, he believes, is condescending or at least should be unnecessary. His point is well taken; the plays, after all, are the things. But when accessibility appears to be the primary intent of the operation, what is one to do?
The Public’s Free Shakespeare in the Park “King Lear” is strikingly clear in every detail. Thanks to un-accented, consonant-sounding readings and the best sound system since Ethel Merman, every characterization and plot development is un-ambiguous. It makes for a respectable three hours spent with a good story, but at the expense of emotional involvement. 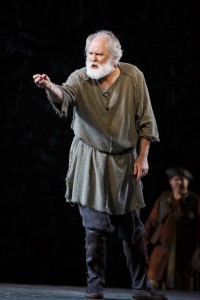 John Lithgow’s New York Times blog and his PBS appearance with Bill Moyers, in which he discussed his preparation for playing Lear, were fascinating. Together with director Daniel Sullivan, he had examined every speech for its precise intent and in seeking that clarity, found himself, he said, hearing those words for the first time. Theater-goers who might really be hearing them for the first time are getting their waiting time’s worth (tickets are free).

Lear’s opening-scene transition from lovable old fellow to wrathful tyrant hinges on the ill-advised divesting himself of his lands and then impulsively turning on his daughter Cordelia for her sin of honesty. Seeking retirement (from his duties, not his title), he succumbs to hollow flattery and rejects the absence of same out of hand, which, to sum up the rest of the play, comes back to bite him.

Under Daniel Sullivan’s meticulous direction, the play’s sub-plots are similarly made clear. Spread as far apart physically as emotionally across the wide stage, Gloucester and his one-good, one-bad sons parallel Lear and his daughters. Goneril and Regan, the evil sisters who turn on dad, are played by Annette Bening (dully) and Jessica Hecht (whiny). 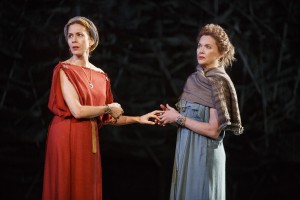 Jessica Hecht, left, and Annette Bening as Regan and Goneril

Lithgow looks the part and declaims with the best of them, but the agile Steven Boyer as Lear’s Fool and Jay O. Sanders as loyal Kent take acting honors along with Jessica Collins’ sweet Cordelia and Christopher Innvar as Goneril’s husband, who eventually sees the light and opposes his wife’s behavior.

Meticulous parsing of the text can have an upside in the tragedies, providing unexpected humor. (“Richard III” is loaded with examples.) An anecdote from Lithgow’s PBS interview makes the point. Near the end, Lear, resigned to his and Cordelia’s fate, says “Let’s away to prison,” where they will “sing like birds i’ the cage” and “laugh at gilded butterflies.” Actors typically poeticize those lines, as Lithgow was doing in rehearsal, until director Sullivan reminded him, one, that being imprisoned is no picnic, and two, that Lear was nuts. Lithgow’s delivery of the speech became light, dotty, ironic. It’s funny. Rueful, but funny.

Few people will be disappointed by this crystal-clear rendition. I rather liked having it spelled out like a primer. It was my ninth “King Lear” (third this year); I’ll not need another real soon.
Thru Aug 17. Tues-Sun at 8pm at the Delacorte Theater in Central Park (enter at 81st and West End Ave). Free tickets are distributed at noon on days-of-performance. People often line up several hours ahead of the distribution time, so plan ahead.

Director? Who needs a director?

Well, the “Puppet Titus Andronicus” performers sure do. Spoofing Shakespeare’s bloodiest tragedy might be a decent idea, and employing puppets (similar to the “Avenue Q” gang) might be a better one, but following up an effective opening scene with sloppy acting, un-funny ad libs and asides to apparent friends in the audience, is not stage-worthy in the least.

The opening, compressing act one of “Titus” into a song, is necessarily disciplined, set to the tempo of the recorded song. Soon after, an air of juvenile silliness overtakes the cast, who have a grand time amusing one another. 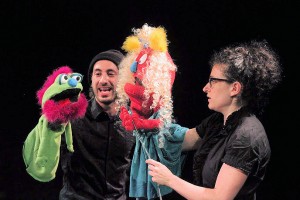 Tightened up and overseen by a director (none is listed), it could be a worthwhile effort. As it is, despite the opening bit and a priceless line from the puppet who delivers Titus’s sons’ heads to him (“I know this is a bad time, but I work mostly on tips”), “Puppet Titus Andronicus” is a waste of time on both sides of the footlights. (I left at intermission.)
The Beckett Theatre at Theatre Row, West 42nd Street, NYC. Closes August 16.