Summer, 1986. A young Navy lawyer is assigned to defend two Marines who killed a fellow Marine during a hazing (Code Red) incident at Gitmo, the Marine Base in Guantanamo Bay, Cuba.  For reasons soon revealed, Base Commander Lt. Col. Nathan R. Jessup does not want the whole story told, and what appeared to be an open-and-shut plea bargain becomes a dramatic trial. 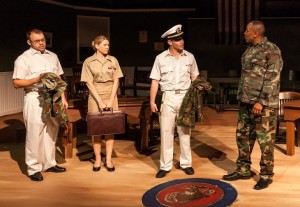 It would be unfair, of course, to compare a community theater production of Aaron Sorkin’s “A Few Good Men” to the movie, every second of which is perfection. It’s also impossible not to.

It must also be difficult for actors to avoid imitating the film performances. Ironically, some of the most effective performances at Holmdel Theatre Company are those that recall the film’s most accurately.

Dave Murray’s Lt. Kendrick, the Bible-thumper whose illegal order (at the behest of the Colonel) results in the tormented Marine’s death, is one. It took me a couple minutes to go from surprise at Murray’s replication to respect for how well he does it. The defendants Dawson and Downey, portrayed by Timothy Cary and Ross Pohling, are also right out of the film. Imitation and creativity need not always be at odds.

Casting against the movie types also works. The prosecutor, Lt. Ross, is older here, which shifts the opposing attorneys’ relationship from friendly competition to paternal concern. Bill King plays that quality well. And diversity is served by the casting of Carmen Balentine as the Corporal who just “follows the crowd to the mess hall.” His scene is excellent. 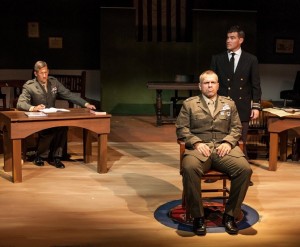 Attempting to channel Col. Jessup, the movie’s most iconic image, would be a fool’s errand. To his credit, James Walsh’s bluster is his own, and the final scene where Jessup is brought down, resonates. As Capt. Markinson, who cannot live with his complicity, David Sussman is precisely right in appearance and demeanor.

Tension escalates as the defense team of Naval Lt. Daniel Kaffee (Dave Duncan), Lt. Sam Weinberg (Bobby Marusiefski) and Lt. Cmdr. Joanne Galloway (Kristin Barber) builds its case. Duncan overacts Kaffee’s flippancy at the start, but his lawyerly attributes emerge as the story develops. Marusiefski is laid-back as the second-chair counsel, whose being Jewish is a factor in Jessup’s disdain.

The sole female, Lt. Cmdr. Galloway, brings the distaff point of view to the plight of the defendants. Ms. Barber could be more assertive, but her Joanne serves the play. (Wisely, Holmdel scuttled plans to cast a woman as one of the defendants.)

Brian Remo’s direction is efficient, although too many pertinent moments are tossed off and diluted by blackouts that are a beat early throughout. Tina Pfefferkorn’s workable set places Kaffee’s and Jessup’s offices in the upstage corners, leaving the foreground open for the centerpiece trial.

People familiar with the movie will enjoy seeing the story played out live. (The play preceded the movie; the Broadway production was, in fact, a condition imposed by Sorkin on the sale of the movie rights.) Theater goers new to “A Few Good Men” are in for a treat: Holmdel’s is a faithful staging of a cracking-good courtroom drama.

The New York Musical Theatre Festival provides emerging artists with the opportunity to see their work in full-scale productions before paying audiences ($25 or less). This July, NYMF featured 24 productions in off-Broadway venues along West 42nd Street. The two I saw were “Searching for Romeo,” selected on the basis of its plot summary, and “Zombie Strippers,” for the intellectual content inferred from its title. Both were hum-dingers.

In Brian Sutton’s (book, music & lyrics) “Searching for Romeo,” Roz, after being dumped by her high school boyfriend, is transported back into Shakespeare’s “Romeo and Juliet” as Rosaline, the girl Romeo crashes the Capulet party to see and then dumps for Juliet. Ros then starts hangin’ out with Paris, who was dumped by Juliet for Romeo. (Familiarity with “R & J” isn’t required, but it doubles the fun.) 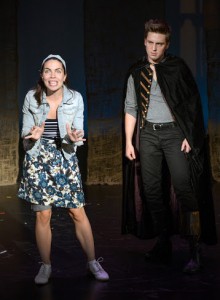 In this slick take, Romeo and Juliet are clueless; Paris’s mother, who must have been edited out of the First Folio, is a domineering social striver, and Friar Laurence is spaced out on potions. Some of the gags are groaners, but the frequent nods to Shakespeare are quite clever.

The 12-tune “retro-pop” score is upbeat and performed as well as many a Main Stem show I’ve seen. Justine Magnusson (Roz/Ros) does the heavy lifting. Her duets with Paris (Zal Owen) are first-rate, and her terrific eleven o’clock number, “Come and Get Me, Here I Am,” should be Justine’s audition song from now on. A commercial production of “Searching for Romeo” would not surprise me.

The same for “Zombie Strippers” would be a surprise, but the raunchy 75-minute musical was anything but boring. Another one-man effort – book, music and lyrics by Mark LaPierre, “ZS” is a spoof of the inexplicably popular back-from-the-dead craze. 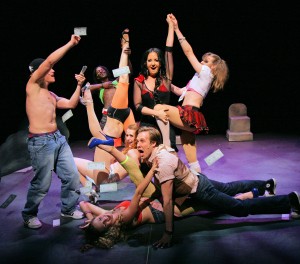 The “Zombie Strippers” gang gettin’ it on. (Photo: Ben Strothmann)

Stripper Tiffany (Ellie Bensinger) and her boyfriend arrive at the cemetery 12 hours late for the funerals of her three co-workers, who met gruesome deaths. They are, however, just in time for Amber, Bambi and Lexxie’s resurrections as grotesque (and, forgive me, sexy) zombies, who threaten to eat Tiff’s boyfriend. (She, warning them off with a pistol: “You’ll be among the un-undead.”)

Goth-girl Jinx (Sariah)’s sex partners all die in the throes of passion, but not before one (Wendell Bullen) executes some fancy hip-hop break-dancing. There’s more ghoulish nonsense that manages to amuse, but like “Romeo,” the songs and the singers are the high points. The tunes are catchy, the lyrics are witty (save an over-reliance on the f-word), and the cast, especially Ms. Bensinger, punches them out in style. Musical director Andrew Wheeler plays a computerized keyboard and composer LaPierre mans an Ableton Live, which a Google search revealed as a “software music sequencer and digital audio workstation.”

And I thought the Moog Synthesizer was still state-of-the-art!