Where else in NYC would a struggling author meet an aspiring actress except in the bar where she works and where he hunkers down at a high-top and tries to write. That’s the spin director Corey Rubel puts on Jason Robert Brown’s unique musical “The Last Five Years” at Asbury Park’s ReVision Theatre, and performed beautifully by two appealing young talents, it works just fine.

ReVision has led a nomadic existence since setting up shop at the Paramount Theatre in 2008. Subsequent Asbury venues have included the leaky-roof Carousel House, a VFW Hall and a former Greek Orthodox church. A permanent home on Cookman Avenue will be operational later this year, but meanwhile, staging “The Last Five Years” in the aptly named (for now) Theatre Bar, tucked into the Bangs Avenue entrance of the old Asbury Park Press building, is inspired. 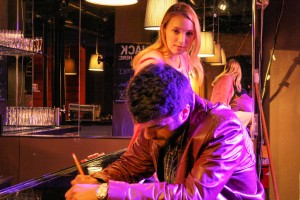 Dark but not dingy, the narrow bar opens into a larger space with a pool table at center and customer seating on all sides. While various locales are invoked during their five-year relationship, it is here that ReVision’s Cathy (Ephie Aardema) and Jamie (Spiro Galiatsatos) met. (The 2002 original and subsequent productions were relatively scenic-free.)

“The Last Five Years” is about a couple who meet, mate and break up after five years. Each tells his/her side of the relationship in song; there’s no spoken dialogue. What makes the show truly unique is that it runs forward and backward at the same time.

Jamie’s account begins with him rhapsodizing over Cathy, “My Shiksa Goddess” (he’s Jewish; she’s not), and ends with him abandoning their marriage. Cathy’s side of the story runs in reverse; she’s heartbroken at the start (“I’m Still Hurting”) and flush with new love 90 minutes later. Moving forward, Jamie becomes gradually unsettled, while Cathy’s story backs up to her initial glow. The songs are alternating solos except for mid-point duets when their narratives coincide and even the pool table plays a romantic role. 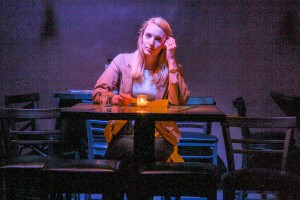 I’ve admired Aardema and Galiatsatos’s work before  – hers in “The Bridges of Madison County” on Broadway and his in ReVision’s “Pippin” and “Spring Awakening.” Now, carrying “The Last Five Years” together, they perform like stars. Backed by musical director Andrew Hertz’s superb ensemble (keyboard, guitar, violin and cello), they communicate a range of emotions through the songs. In “Nobody Needs to Know,” Spiro personalizes Jamie’s guilt over his indiscretion. “A Summer in Ohio,” one of the best show-biz songs ever written, exposes Cathy’s bittersweet exile to summer stock. (She plays Anita at the matinee.) Ephie aces the number. 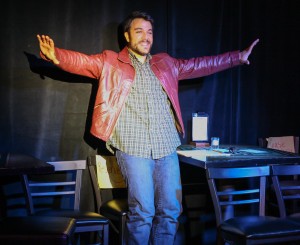 Director Rubel’s concept negates the oft-stated criticism that, except for the mid-point duets, the show plays like two solo acts. Having both characters in the bar throughout emphasizes their intimacy even when their narratives place them apart. Robert Rutt’s lighting design is a major asset. The actors use the entire asymmetrical area, and at the precise moment they hit their spots, the spots hit them.

(Plus, my premium vodka cocktail was only seven bucks.)