Oldies are goodies at The Shaw Festival

Once could be a fluke, twice a coincidence. But when a company consistently transforms old plays by obscure authors – or obscure plays by old authors – into instant classics, it’s a rare combination of talent and skill.

I had never seen George Bernard Shaw’s brilliant “Fanny’s First Play” before seeing it at his namesake Festival in 2001. And no one had seen Githa Sowerby’s intriguing “The Stepmother,” whose only production before The Shaw’s in 2008 was at a London theater club in 1924…for one performance!

Resurrecting oldies is in keeping with The Shaw’s mandate. Limited to Shaw’s plays when founded in 1962, the Festival soon expanded to include plays written during Shaw’s years (he died in 1950 at age 95), then to later-written plays set in that era, and to any plays that reflect his values.

This year’s find is early 1900s playwright St John Hankin’s “The Charity that Began at Home,” sub-titled “A Comedy for Philanthropists” and featuring a cast that melds a baker’s dozen disparate characters into a seamless ensemble. 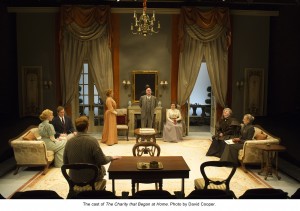 The cast of “The Charity that Began at Home” (Photos: David Cooper)

Lady Denison, guided by her self-ordained spiritual advisor, invites guests to her country home based on their unlikeliness to be invited anywhere, resulting in an Edwardian drawing-room full of cranks and eccentrics, including the “greatest bore in London,” a stern German-language teacher and a raffish bounder of questionable repute who becomes involved with Lady D’s trusting daughter.

The play is a delightfully witty stream of commentary on class-consciousness, social behavior and romantic delusion. Meticulously directed by Christopher Newton, the play is acted with relish. Jim Mezon is particularly amusing as the loquacious bore, whose moment of self-realization is touching, and Darcy Gerhart turns in a cameo gem as a maid who simply weeps for ten minutes.

St John Hankin’s plays have been noted as ending unhappily or “not ending at all.” To be sure, this play leaves questions unanswered, but loose ends are a fact of life. Would they were all as entertaining as “The Charity that Began at Home.”

Philip Barry’s “The Philadelphia Story” is better known, most likely from the Cary Grant, Katharine Hepburn, James Stewart movie. What a pleasure it is to see the play faithfully staged and accurately reflective of its ‘Main Line’ Philadelphia setting.

The Lord family is abuzz with preparations for daughter Tracy’s upcoming wedding. When her ex-husband and a reporter and photographer from a gossip magazine show up, the plans go awry. The ending could not be more predictable, but getting there is a lot of fun. 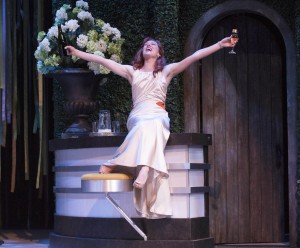 Just as Hepburn (and Grace Kelly, in “High Society”) did so well, Moya O’Connell reveals just enough of Tracy’s untapped passion beneath her proper exterior to let us know that the stuffed-shirt fiancé doesn’t stand a chance. She and the cast of 15 illuminate the time and place, as do the drawing room/garden sets. The styles – of dress, decor and deportment – are 1939, but they are natural rather than dated. Director Dennis Garnhum’s concept takes us on a journey to another, gentler time. And a welcome trip it is. Philip Barry was onto something 75 years ago. “Is there no such thing as privacy anymore?” Tracy’s mother asks. “Only in bed, mother; and not always there.”

Shaw’s own plays retain an important place in the Festival repertoire, and “Arms and the Man” sparkles as it takes pokes at love, war, honor, class, pomposity and manners. During a fictional Bulgarian war, a Swiss mercenary soldier takes refuge in the bedroom of a young woman who, intrigued by the interloper (he carries chocolates instead of bullets), helps him escape. As in “The Philadelphia Story,” our heroine is engaged to an unworthy suitor and, like that other play, there’s little doubt from the start about whom she’ll end up with. 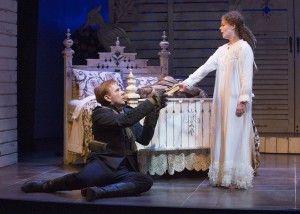 Graeme Somerville and Kate Besworth in “Arms and the Man”

It’s been said that Shaw sacrificed character definition for the sake of ideas, but not here. The fully realized characters in “Arms” are perfect vessels for delivering the playwright’s pointed, meaningful and often cynical ideas. It is an intelligent feast of romance and comedy. The most-performed of Shaw’s 40-plus plays, Laurence Olivier and Ralph Richardson chose it to open their first Old Vic season in 1944. No group is better equipped to capture its verbal dexterity today than Shaw’s namesake company.

As for “Cabaret,” the reasoning behind the tubular contraption that dominates the stage escaped me. The spiral erector set fire escape obscures the locations, the characters and, unfortunately, the actors playing them. 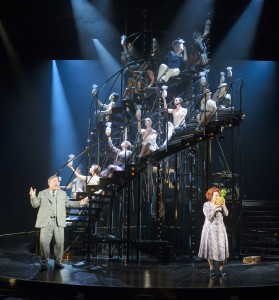 The more I see “Cabaret,” the more I realize that Herr Schultz and Fraulein Schneider most clearly represent the horror of embryonic Nazism that underlies the musical adaptation of Christopher Isherwood’s “Berlin Stories,” set in 1931.

The point is well made here. As the two, Benedict Campbell and Corrine Koslo overcome their stage surroundings. The others fare less well.

The four plays run into October at The Shaw Festival, Niagara-on-the-Lake, Ontario, Canada. The season also includes Shaw’s “The Philanderer,” Sean O’Casey’s “Juno and the Paycock,” and “The Mountaintop,” about Martin Luther King, Jr.’s last day. Informational brochure: 800-511-SHAW or at www.shawfest.com