The “Butler” Did It!

Rarely has a slice of history been as entertainingly – and accurately – portrayed as in “Butler,” Richard Strand’s world-premiere play at New Jersey Repertory Company. The characters in “Butler” really existed and the circumstances really occurred. It wouldn’t surprise me to learn that the dialogue was lifted from an actual recording.

There was, of course, no recording device in the office of the Commander of Fort Monroe, Virginia on May 23, 1861, six weeks after the Confederate bombardment of Fort Sumter precipitated the Civil War. No, the dialogue between General Benjamin F. Butler and an escaped Negro slave, as he’s labeled, is fabricated by Strand, who scripted it into “Butler.” Lucky us. 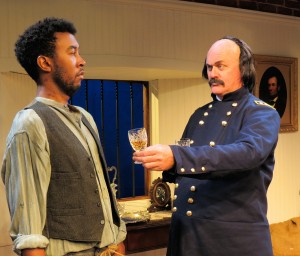 General Butler (Ames Adamson) and his adjutant, Lt. Kelly (Benjamin Sterling), are astonished by the audacity of Shepard Mallory (John G. Williams), who, seeking sanctuary, “demands” to speak with the General. Fort Monroe, a Union facility, is in Virginia, which had declared itself a Confederate state. The Articles of War mandated that fugitive slaves, deemed “property,” be returned to their owners.

The onerous Article was thwarted through an intricate legal maneuver that revolutionized the disposition of slaves and which forms the basis of the play. (When President Lincoln was informed, he directed other Union generals to do the same.)

Strand’s characters evolve from mutual hatred to grudging respect and even hints of friendship. (General Butler letting the slave call him “Ben” seems a stretch, but who knows? Maybe he did.)  The attitude adjustment occurs naturally over the deftly directed (Joseph Discher) two hours.

Affecting the real Butler’s half billiard ball, half bushy hair style, Adamson creates a martinet with heart. The portly General is firmly in command, but he’s also a good listener, not above accepting an escaped slave’s guidance. Adamson, a highly skilled character actor, huffs and puffs when appropriate, but his General knows that a calming glass of sherry can relieve tension. Or create it. 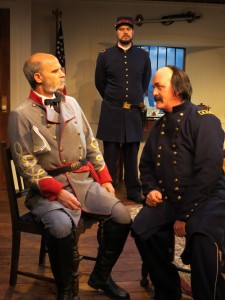 Sterling is indeed sterling as Lt. Kelly, whose rigid manner thaws into comradeship, and David Sitler plays a Confederate Major who arrives to take the slave back to his owner. The Major could have been a caricatured buffoon, but Sitler, whose mutton-chop whiskers are perfection, does not over-act the pompous Major.

The revelation in “Butler” is John G. Williams, who enacts Shepard Mallory’s combination of arrogance and desperation to a tee. Fearing for his life, dressed in rags and manacled, the slave maintains his dignity. It’s a fine performance.

The wickedness of slavery is communicated without any lurid descriptions or use of language that must have been common in 1861. Who would imagine that a slave’s fear that his ability to read might be discovered could induce shudders on his behalf?

At the end of “Butler,” something mysterious occurs that couldn’t have happened in the time frame presented. Well guess what: that’s what did happen and when. Richard Strand didn’t invent his plot, but there aren’t any new ones anyway. Like most new plays, “Butler” would benefit from some trimming, especially in the early scenes, but making imaginary or real characters so sympathetic, so funny and so relevant, is damn good playwriting no matter the source.