Opposite Attractions Attract at Stratford

[June 16-23 marked my annual pilgrimage to the Stratford and Shaw Festivals in Ontario. Comments on plays seen at Stratford are posted below. Shaw follows soon.]

Colm Feore and Donna Feore are a formidable theatrical couple. Married in real life, they are mainstays of the Stratford (Ontario, Canada) Festival where he is currently bringing exceptional depth and clarity to “King Lear” and where she has directed and choreographed a delightfully buoyant production of “Crazy for You.” The two plays could not be any more different, nor could the productions be any better.

Supported by a superb ensemble, Feore’s is the most emotionally involving Lear I’ve seen. He’s stronger at the start than usually played (Feore, at 55, is a youngish Lear actor), making his descent into madness and despair even more heart-rending. 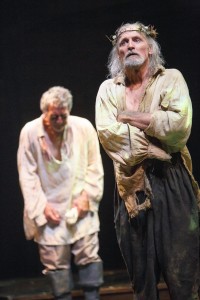 Lear has divided his kingdom in three so that his daughters and their husbands may assume his former “cares and business,” first asking them to declare their devotion to him. When the youngest, Lear’s favorite, Cordelia, suggests that her love will be divided between father and husband, she is disinherited in a startling, near-violent outburst.

Playing it thus, Feore (and director Antoni Cimolino) illustrate how quickly Lear’s emotions overwhelm his reason, a theme that prevails through his hasty banishment of the Earl of Kent (for defending Cordelia), his mistreatment by his daughters and his subsequent mental and physical unraveling.

The term “accessible” might be over-used with reference to Shakespeare, but the clarity of this “King Lear” is remarkable. The language is precise without being mannered, and hints of Lear’s approaching dementia – arbitrarily changing his mind, weakening physically – are woven into the fabric of the performance.

Among the other players, Scott Wentworth is an outstanding Gloucester; Stephen Ouimette mines every bit of wit and wisdom from Lear’s Fool; and though Cordelia disappears early in the play, Sara Farb makes her absence as significant to us as it is to her father.

Reconciling after Lear/Feore’s chilling, stormy, lightning-lighted mad scene, Cordelia’s insight prevails. “We are not the first Who with best meaning have incuurr’d the worst,” she says as they embrace. A bit later, Lear advises her to “Wipe thine eyes.” Everyone within earshot must need do the same.

That “Crazy for You” is performed on the same stage as “Lear,” often within hours of one another, attests to Stratford’s skill in appealing across a wide spectrum of theatrical tastes. The combination of George and Ira Gershwin songs, bright romance, corny jokes (that work) and dazzling dance numbers, blends perfectly into a timeless piece of Musical Theatre.

The plot couldn’t be simpler – or more familiar. A dis-used theater in a half-deserted western desert town and its lethargic inhabitants are energized by an enterprising New Yorker with theatrical ambitions who comes up with an innovative idea to save the day: “We’ll put on a show!” he declares. 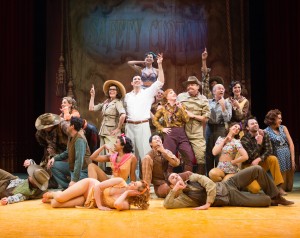 Members of the cast of “Crazy for You” (Photo: Cylla von Tiedemann)

We’ll feature a pair of first-class singer/hoofers (Josh Franklin and the delectable Natalie Daradich); back them with talented (and sexy) Follies Girls and Cowboys; assemble a swingin’ twenty-piece orchestra; craft a hundred costumes; appropriate twenty Gershwin melodies (“I Got Rhythm,” “Embraceable You” and “Nice Work If You Can Get It” for starters); and turn them over to brilliant director-choreographer Donna Feore.

And what will we get? Just one of the most entertaining musical shows of this or any season at this or any theatre company, that’s all.

Tinkering with Shakespeare is almost mandatory, and “A Midsummer Night’s Dream” offers a ton of opportunities. Parallel themes revolve around two pairs of mix-and-match lovers; a forest King and Queen, attended upon by assorted fairies and sprites; and a play-within-the-play, whose bungling cast of “rude mechanicals” make community theater seem like Broadway.

Hermia runs off with Lysander when her father commands her (under pain of death, no less) to marry Demetrius, who scorns the affection of the doting Helena. The four become entangled in the rivalry between Oberon, King of the Fairies, and his Queen Titania, when Oberon’s trickster Puck applies his love-inducing potion to the wrong guy.In a gender-switch, Stratford’s Lysander is female, which adds an interesting dimension to Hermia’s vehement rejection of Demetrius and even, sad to say, to her father’s extreme threat. 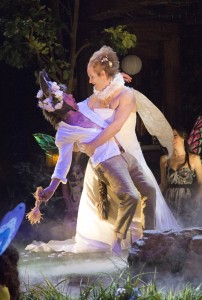 Turning Titania into a drag queen is less effective. Played mincingly by one of two male actors in alternate performances (the other plays Oberon), it’s a distracting agenda-driven gimmick, as is the prologue (not Shakespeare’s) of a male same-sex, mixed-race wedding reception.

Not done yet. Hermia’s father is here deaf, requiring him to sign his speeches, which are audibly translated by another character. Plaudits to them, I thought, for hiring a deaf actor. Then I read in director Chris Abraham’s program notes that the decision to play him deaf was made during rehearsals and that a teacher “from the deaf community” was brought in to teach Sign Language.  My thoughts then changed from praise to wondering where were the deaf-actor pickets.

What works best are the Duke and his betrothed Hippolyta’s opening and closing scenes, the young couples’ mating mix-ups, and the mechanicals’ rehearsal and performance scenes. Stratford veteran Stephen Ouimette is a brilliant comic actor. Grabbing the role of Bottom by the donkey ears and running with it, he’s worth the price.

Better equipped than I to critique “Alice Through the Looking Glass” would be either of the two adolescent girls with whom I swapped seats at intermission (my row G for their T). As familiar with the Alice books as I am unfamiliar, they assured me that James Reaney’s adaptation of Lewis Carroll’s sequel to “Alice in Wonderland” was faithful to the story and to the oddball characters’ behavior toward Alice.

Alice (Trish Lindstrom) escapes into a fantastical world where, in order to become a Queen, she must navigate her way across eight squares of a large chess board. Spoiler alert: She makes it, but only after adventures (and mis-adventures) with Red and White Queens and Knights; an ill-fated gnat; Tweedledee (and dum); a walrus, unicorn et al; and a high-up Humpty Dumpty, whose long arms are manipulated from below and whose ‘great fall’ brings out all the King’s men – with omelet pans. 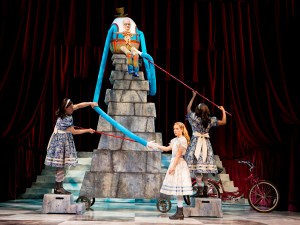 The effects are accomplished the old fashioned way, with bright-colored cutouts, set pieces and costumes, the better to engage the imaginations of kids as young as five, I’d say. And the likes of “I see nobody on the road” countered with  “Imagine being able to see nobody!” stretch the adult mind as well. Keyboardist Jonathan Monro’s original music is perfect accompaniment – and just as enjoyable from the back row.

“Lear,” “Crazy,” “Dream” and “Alice” run through October 11. Also running currently: “Man of La Mancha,” “Hay Fever,” “Mother Courage” and Shakespeare’s “King John.” A ‘chamber play’ of “Midsummer Night’s Dream” opens July 24, and “The Beaux Stratagem” and Shakespeare’s “Antony and Cleopatra” open in August. For a schedule and ticket-order booklet: 800-567-1600 or at www.stratfordfestival.ca