There are worse things you could do: “Grease” in Red Bank

Let’s separate the play from the production. “Grease” isn’t much of a play, but once you get past the mindless plot, the shallow characters and the questionable moral (there’s no virtue in virtue), the Phoenix production is pretty good.

Set in the 1950s at fictional Rydell High School, “Grease” premiered in Vietnam-weary 1972 and ran for eight years!  Now however, after two less-successful Broadway revivals and innumerable community and high school productions, the show is well past its sell-by date.

That said, “Grease” is a good Girls Night Out – at least for the Girls in the cast. The females dominate the story, and Phoenix’s Rydell girls clearly enjoy flouncing about in puffy skirts, singing the familiar score and dancing to Rachel Wasser’s free-style choreography.

The guys are an important component, of course (Rizzo’s suspected pregnancy requires at least one), but the show itself relegates them to support status, a function the Phoenix fellows fill very well. 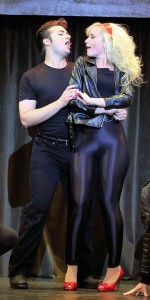 The songs are generic rock and roll, some of which achieved mainstream popularity. “We Go Together” leads off, segueing into the appealing “Summer Nights” duet, nicely done by Mazzara and Bera. Marty (Kate Pentek) and the Pink Ladies  pine over “Freddy, My Love,” and would-be tough-guy Kenickie (Ian Laudano) and the Burger Palace Boys rock out on “Greased Lightnin.’”

Ms. Bera stops the show with Sandy’s “Hopelessly Devoted to You,” one of fours songs added from the the 1978 film adaptation, and Jennifer Townsend scores with Betty Rizzo’s sarcastic “Look at Me, I’m Sandra Dee” and her assertive “There Are Worse Things I could Do.” 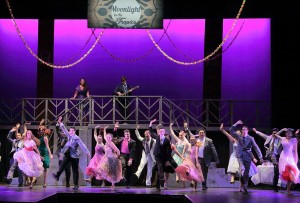 The cast of “Grease”

Other worthy contributors include Chelsea DeMaio as the wistful beauty school dropout, Kyle Hayes as a likable nerd and top-notch dancer Torie-Marie Gigante as Cha-Cha DiGregorio. Jan (Alyssa Cichy) and Roger (Mark Regan, Jr.) are an amusing couple. She moons over him and he moons everyone else.

Two adult characters, a befuddled teacher and an unctuous radio DJ, are played by Rosemary Mazzara and JD Wilson. Both are real-life school teachers, which adds an ick factor to the DJ’s intense lip-lock with teen-girl Marty.

Joseph Stefanelli’s direction is appropriately glossy and fast-paced. If the cast’s schoolmates turn out to see the show, a possibility that might have occurred to the Phoenix play-selection committee, Stefanelli and Jim Jacobs and Warren Casey will have done their job.  (Never heard of Jacobs and Casey? They wrote the music, lyrics and book of “Grease.”)

The “Grease” guys get their moment.