I remember seeing “Third” at Lincoln Center in 2006, but I had forgotten some of the play’s key elements: the ending, for one, which is as tidy a resolution as you could wish for, and how ingeniously the plot and characters of Shakespeare’s “King Lear” are woven into the 400-year later play. (Do not be put off by that; lack of familiarity with “Lear” is not a barrier to appreciation of “Third.”) After seeing Two River Theater’s sharp, insightful take on Wendy Wasserstein’s last-written (and under-rated) play, it’s unlikely that I’ll ever again forget anything about it. You won’t either.

Ending its twentieth season with “Third” represents a sort of bookend for Two River, whose second play in its very first season was Wasserstein’s Pulitzer-winning “The Heidi Chronicles.” Famous and successful enough while she was alive, Wendy became revered in theatrical circles after her untimely death in 2006 at age 55. Sensitively directed by Michael Cumpsty and acted without a trace of artifice, Two River’s “Third” is imbued with that reverence. 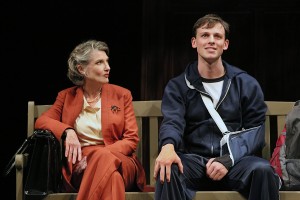 The lights come up on an austere lecture hall in a small New England college where English Lit Professor Laurie Jameson (Annette O’Toole) is debunking some generally accepted notions about King Lear and his daughters. Her assertions are challenged by Woodson Bull III (Christopher Sears) a student athlete (wrestler), nicknamed Third for his hand-me-down lineage.

The play is set in the early George W. Bush administration, when opposing views on the invasion of Iraq were sharply divided, not least on college campuses. Asked if he’s a Republican, Third sidesteps the question. “I’m pro-choice and I recycle,” he says, but it’s soon clear that his political views are to the right of the ultra-liberal Professor. (They could hardly be otherwise.)

The plot hinges on the Prof rejecting Third’s thesis on “Lear” as impossible for someone of his perceived lack of academic sophistication to have  written, and she brings him up on charges of plagiarism. Whether or not the paper is original is debated against the background of political stress, exacerbated by the prof’s father’s descent into dementia and a needy, cancer-stricken colleague. As in most of Wasserstein’s insightful works, placid settings are not always what they seem.

Ms. O’Toole’s task is not an easy one. Professor Jameson is not the most ingratiating individual you’ll ever meet. She’s highly opinionated and can be strident; the character teeters on the border of likability, but checked and balanced by the actor and director, she does not cross that line. O’Toole’s prof is dominant, but not oppressive.

Woodson III, or Woody (he prefers Third), fleshes out as the play progresses. Sears could not look any more like a college student-athlete, nor could he – or anyone – act it better. In a perfectly written off-campus scene, Third and the prof’s willful daughter, played to perfection by Emily Walton, achieve that instant rapport that’s only possible when you’re twenty.

Amy Horn is excellent as the colleague, whose loyalty is divided between academia and her bff, and one looks forward to seeing J. R. Horne, who plays Professor Jameson’s dotty father, tackle King Lear some day.  (That’s a compliment.)

Michael Carnahan’s multi-purpose set, while spare, leaves no doubt about where we are, and Rui Rita’s lighting effectively directs attention to wherever director Cumpsty wants it. (The Freudian analyst is in the dark, but aren’t they all?)

By the way, the play does answer the question about the authorship of Third’s “Lear” thesis. You won’t learn it here, but it’s well worth visiting Two River Theater to find out for yourself.