How would you like to spend an hour-and-a-half in a theatrical legend’s living room while he reminisces and reprises highlights from his career, spanning vaudeville, stage and screen appearances and including success as an audio-book narrator?

That’s what sitting through Just Jim Dale feels like. Older in years (he’s 78) and steeped in charm, Jim Dale turns the off-Broadway Laura Pels Theatre into his living room for 90 minutes of ingratiating coziness.

It’s a mini-course in show business history, from young Jim leaving a factory job at 17 to tour British Music Halls as a comedian, up to his induction, 60 years later, into the American Theater Hall of Fame, along the way winning multiple awards for his narration of all seven Harry Potter books. 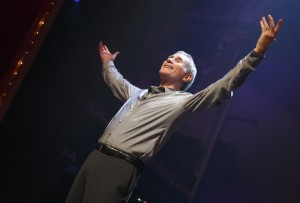 Just Jim Dale is very much a personal visit with the former busker-cum-Broadway star (Joe Egg, Candide, Scapino), whose father’s early advice, “Learn how to move,” set him on his course. While his dancing now is limited to a few soft-shoe riffs, he still moves with uncommon grace, and hearing Jim Dale sing “There’s a Sucker Born Every Minute” 35 years after introducing it in Barnum is worth the price of admission.

Among his composing credits are the lyrics to the Oscar-nominated “Georgy Girl,” which he also reprises, and both music and lyrics of “Dik-A-Dum-Dum,” which becomes even sillier than its title when the audience sings it with him.

The show is not quite “just” Mr. Dale. Pianist Mark York provides smooth accompaniment, and Richard Maltby, Jr. has directed the still-debonair star’s outing into one of the most agreeable solo shows of recent vintage.

Some clichéd sayings make no sense without examples. (Try explaining “no good deed goes unpunished” without one.) “Life imitates art” is one such. (Until recently my example was people lined up to see The Elephant Man.)

The movie Heathers dates from 1989. Director Michael Lehmann’s satire of high school cliques wasn’t much praised upon its release, but it has evolved into a cult favorite over the ensuing quarter-Century.

For those unfamiliar with the story, it’s about a male student and his girlfriend killing off several classmates, beginning with one of three ‘mean girls’ all named Heather (thus the title) and passing the murders off as suicides. Finally, when his plan to blow up the gym during a student anti-suicide rally is thwarted, he straps the bomb to himself and detonates it. All in dark-comedy mode.

A week ago Saturday, after attending the off-Broadway Heathers: The Musical at New World Stages on West 50th Street, a stage adaptation that adheres closely to the murders/suicide plot of the film, I learned of the previous day’s slayings and suicide at the University of California, Santa Barbara.

The show Heathers: The Musical is actually very good. The music is catchy; the lyrics are clever and amusing, as is the book. The direction and choreography are top-notch and the mostly-young cast is uniformly excellent. In the leading role, Barrett Wilbert Weed was Drama Desk nominated for Outstanding Actress in a Musical.

Despite its assets, however, I cannot recommend it. Sadly, my takeaway from Heathers: The Musical is a new way to define “Life imitates art.”

Note: In my Tony Award predictions (see below), Best Actress in a Musical is “a five-way guessing game.” Since I wrote that, and prior to the voting deadline, it was announced that Carole King will appear and perform on the Tony telecast. I now consider Jesse Mueller (Carole in “Beautiful: The Carole King Musical”) to be a shoo-in. 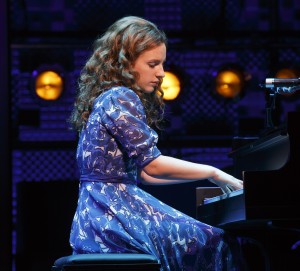