“Trouble in Mind” (and “Chaos” too) in Red Bank

A review of “Trouble in Mind,” on stage at Two River Theater, could begin by praising artistic director John Dias for resurrecting the play by African-American playwright Alice Childress. Or by noting that the play employs the popular backstage play-within-a-play structure brilliantly. Both, combined with superior acting and directing, contribute to the quality – and the importance – of “Trouble in Mind.”

The authentic setting is Two River’s own stage, bare to the walls except for a table and a few chairs, a prop door-frame and the requisite ghost light. Written and set in the mid 1950s, a predominantly black cast is set to begin rehearsals for the Broadway premiere of “Chaos in Belleville,” which its white director condescendingly labels an “anti-lynching play.” 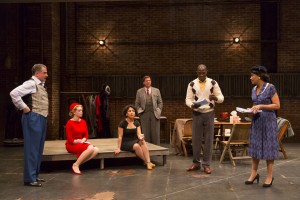 In “Trouble in Mind,” Childress, herself a former actress, captures the protocol of 50s-era actors, both black and white, as well as the servile attitudes of “Chaos in Belleville”‘s indentured blacks and their somewhat beneficent white overlords. The two plays emerge both as mirror images and polar opposites.

The “Trouble” actors have roles in “Chaos,” which is set on a southern plantation and in which actor John Nevins (McKinley Belcher III) plays the target of a lynch mob. It is suggested that he be locked in the local jail for his own protection, a move his “Chaos” mother encourages.

Brenda Pressley plays the actress who, in turn, plays that mother. Alternately impassioned and quietly seething, the actress cannot reconcile her own assertive values with the “Chaos” mother’s acquiescence. Pressley commands the stage in a remarkable performance that illuminates both past and present.

As the actress who plays a plantation maid, Amirah Vann takes slave-like subservience to an extreme level, encouraging laughter likely rooted in embarrassment. Point well made.

Brian Russell and Hayley Treider play actors who then play the plantation owner and his daughter. Russell amuses with his efforts to “get down” with the African-Americans in the cast, and Treider captures first-time actress Judy Sears’s innocence as well as the plantation-daughter’s relative liberalism. (There’s a hint of backstage romance between actress Judy and actor John. The playwright trod gently here, even in 1950, but Treider and Belcher play it perfectly.) 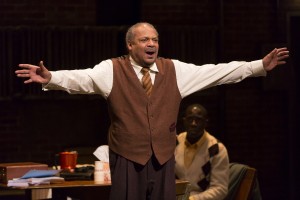 Tony Award-winner Roger Robinson, with whom I worked in stock years ago, plays the elder statesman among the acting company. Trusted with much of the comedy, he does not miss a beat, but his triumph is the relating of an actual lynching that his character witnessed at age six. The opening night audience’s silence was deafening.

The director within the play humiliates his stage manager (Jonathan David Martin, properly mild), disses the venerable stage doorman (superb character-actor Robert Hogan), and demeans his cast. Steven Skybell does not entirely resist the temptation to over-act the task-master, but his nuanced delivery of the climactic ‘image vs. reality’ speech goes a long way toward redeeming both character and actor.

Jade King Carroll does double duty as the actual director of “Trouble in Mind” and, of course, of the “Chaos in Belleville” scenes. As such, she is charged with elucidating the racial pressures of both depicted eras as well as allowing considerable humor to leaven the proceedings. Ms. Carroll succeeds admirably at both.

Seeing “Trouble in Mind” and Lorraine Hansberry’s “A Raisin in the Sun,” also about racial issues, in a two-week span reinforces a belief in Theatre as an educational as well as entertainment medium. Neither play solves anything, but they sure set you to thinking.