A Raisin in the Sun is set firmly in its time (1950s) and place (inner-city Chicago), but it transcends those restrictions in its depiction of a family in crisis. The particular family is African-American (“colored” or “Negro” in context), and their plight centers around the opportunity to move from their run-down, poverty-stricken neighborhood to a wholly-white enclave across town.

Racial discrimination and black-on-black crime are essential plot points, but it is the intra-family conflicts that drive the play. Ten years to the month after its last revival, “Raisin” is back on Broadway, meticulously directed again by Kenny Leon and featuring Denzel Washington as Walter Lee Younger, the role created by Sidney Poitier in 1959. 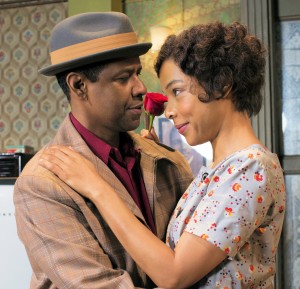 “Raisin” was the first play by an African-American woman to be produced on Broadway. Lorraine Hansberry, who died in 1964 at age 34, was also the youngest American playwright and the first African-American to win the New York Drama Critics Circle Award for Best American Play. Her play has not only stood the test of time, it has become a revered classic.

The ’04 revival, featuring lesser actor Sean Combs (aka P. Diddy), shone a brilliant spotlight on the female characters. Phylicia Rashad and Audra McDonald won Tony Awards as Walter Lee’s mother and wife, and while Denzel is a far more accomplished actor than Diddy, it’s still clear to me that the play is about its women. 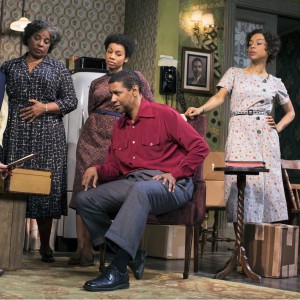 Walter’s mother Lena (Latanya Richardson Jackson) is the default head of the family, while Walter and his wife Ruth (Sophie Okonedo) toil for low wages as a chauffer and a domestic. Walter’s sister Beneatha (Anika Noni Rose), who dreams of becoming a doctor (Walter’s acknowledgment of that provides an exhilarating jolt), is juggling polar-opposite suitors. The three 1950s women represent the past, present and future of African-American women, and every nuance of their familial bonds is mined by these three marvelous actors.

Their common denominator is son/husband/brother Walter. If Poitier was the perfect Walter 55 years ago, Denzel is the perfect contemporary actor to not only re-explore Walter’s anxieties and frustrations, but also to bring an under-served audience into the theater.

The character is well-suited to a star personality. Downtrodden and bitter at the start, Walter is buoyed by the prospect of converting his late father’s insurance payout into a business opportunity that everyone but him realizes is a pipe dream. Naively bilked out of the money, he hits rock bottom until, drawing on the experience, he “attains his manhood” in a scene that Denzel plays with quiet intensity.

The ending of the play is gratifying. While some questions remain unanswered, everyone ends up happy, including the audience that throngs the stage door area after every performance. Much has been said about the age difference between Walter Lee Younger and Denzel Washington. The character was written as age 30. In deference to Denzel’s age – he’s 59 – they’ve changed it to 40, an age that he realistically embodies. Yes, he’s older than the role. So what.

Sitting through All the Way, about the machinations that led to passage of President Johnson’s 1965 Civil Rights Bill, is like being the proverbial fly on the wall. Some of the political give-and-take is verbatim from recorded testimony and speeches, but the most compelling portions of Robert Schenkkan’s play are private conversations that, while fictional, have the ring of truth. At nearly three hours, “All the Way” is not one minute too long. Bryan Cranston’s LBJ is a certain Tony nomination. Supporting Actor Brandon J. Dirden’s uncanny evocation of Martin Luther King, Jr. should be as well.

Film historian Leonard Maltin described Sylvester Stallone’s 1976 Rocky as “an old B movie brought up to date.” The Broadway adaptation is a new B musical, back-dated.  A two-bit pug fighter gets a shot at the heavyweight champ, and (spoiler alert) while he loses, he goes the distance, a grueling 15 rounds. 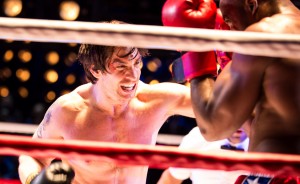 The bout that occupies the last 20 minutes is a spectacle. Andy Karl (Rocky) and Terence Archie (Apollo Creed) execute their fight choreography proficiently, but the bout and the dull two hours that precede it add up to empty calories.

If/Then is about what might have been if Elizabeth had made different life-defining choices from the ones she actually made. Or maybe it’s about wishing she had chosen a different path. Or not second-guessing and being content with the choices she did make. Any or all of those; I’m not really sure. But I do know that Idina Menzel’s brilliant, wide smile is as pleasing to the eye as her roof-raising singing, which transcends the ordinary music, is to the ear. She’s another odds-on Tony nomination.