Musicals: On and Off-off B’way

Dealing as it does with the rise of Nazism in 1930s Berlin, the Joe Masteroff (book), John Kander (music) and Fred Ebb (lyrics) play does not lend itself to froth, nor does this production offer any. It is top-flight musical theater, to be sure, but also as dramatically sound as any straight play. 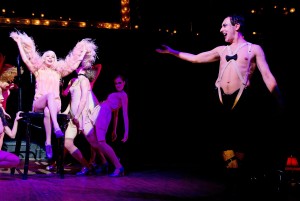 After the Emcee bids everyone “Wilkommen” to the sleazy Kit Kat Klub, the play follows American writer Clifford Bradshaw’s (Bill Heck) relationship with British ex-pat chanteuse Sally Bowles (Michelle Williams) from flirtation through co-habitation to implosion. (The source is Christopher Isherwood’s “Berlin Stories.” Bradshaw is Isherwood’s stand-in, and there really was a Sally Bowles.)

Cumming’s Emcee is once again compelling, but Michelle Williams’ Sally is a revelation. Immersed in the role, she outlines Sally’s decline scene-by-scene and song-by-song. “Don’t Tell Mama” is perky, “Perfectly Marvelous” is needy, “Maybe This Time” is delusional, and the title song is devastating. Williams’s considerable beauty is tamped down to Sally’s brittle prettiness, and her inevitable return to the Kit Kat is tragic.

“Bullets Over Broadway” is a victim of high expectations. It’s adapted by Woody Allen from his movie about a 1920s playwright forced to cast a gangster’s moll, directed and choreographed by Susan Stroman (“The Producers” et al), and it features such vintage numbers as “I’m Sitting on Top of the World” and “Tiger Rag,” but the whole amounts to less than the sum of those parts. 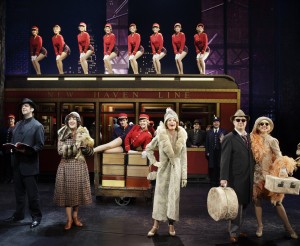 “Bullets” is oddly uninspired. It opens with a sprightly “Hold That Tiger,” then levels off into mediocrity, ending with an embarrassing “Yes, We Have No Bananas.” Best are Nick Cordero as the bodyguard who sings “Up a Lazy River” as he shoots to kill, and the gangster-dancers whose tap routine is a blissful five minutes. Otherwise, it’s Yes, we have no upside.  [St. James Theatre, 246 West 44th Street, NYC]

“Lady Day at Emerson’s Bar and Grill” is set in that South Philly dive in 1959, a few months before Billie Holiday died at age 44. In the 90-minute piece, Lady Day sings a dozen numbers and relates her life story in unsparing detail. I’ve seen the role played by a fine actress who sang well enough and by an excellent singer who got through the text without embarrassing herself. 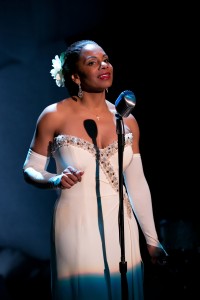 Then there is Audra McDonald, who is in a class by herself. My companion wondered whether we’d hear the singing of Billie or Audra. Remarkably, both singers are wholly present throughout. And Billie’s meanderings through childhood poverty, flirtation with prostitution, battles with racism and descent into heroin addiction are acted to heart-rending perfection. (Lanie Robertson’s flawed script has never been better served.)

Backed by pianist Shelton Becton’s trio, the songs, in McDonald’s exquisite re-creation, illuminate Billie’s life. “”What a Little Moonlight Can Do,’ “Crazy He Calls Me,” the revealing “God Bless the Child,” the haunting “Strange Fruit” and more: hearing them is like hearing Billie Holiday in that saloon. Audra McDonald is the finest singer-actress of our time. No contest. [Circle in the Square, 50th Street east of 8th Ave, NYC]

There are eight million stories in the Naked City, and there might also be that many theater venues. I discovered one recently on the second floor of a church on West 86th Street, where a highly original play-with-music enjoyed a sold-out weekend run. Written (book), directed and choreographed by Tricia Brouk, “Committed” is about a group of patients in a psychiatric institution.

Newly arrived Belle (Erica Lustig) is greeted musically with “Welcome to the Madhouse,” which is followed by a formulaic – but never boring – introduction of the various maladjusted characters. Sex-charged Kitten (Kathryn Murphy) has a libido-control problem. (She also makes a good case for the Prince having forced himself onto Cinderella.) Mary (Sarah Bierstock) is religiously obsessed. (“Jesus is the only drug I need…next to Zoloft.”)

“Committed” is well-acted and vocally very secure (credit music director Zach Orts). Its message is delivered gently but clearly. These folks are mentally and emotionally mired in “the black,” and the closing number sums up their feelings. They each long to“make my way, keeping the black at bay.” Don’t we all. [The play’s brief run has ended, but another production is in the works.]