On February 17, 1673, during a production of his final play, Le Malade Imaginaire (“The Imaginary Invalid”), Jean-Baptiste Poquelin, better known as Molière, suffering from pulmonary tuberculosis, was seized by a coughing fit and a hemorrhage while playing the hypochondriac title character Argan. He finished the performance but collapsed again and died a few hours later.

In the same role at Holmdel Theatre Company, Michael Kroll faces only fictional maladies and fares better. Moliere’s lesser-known (for good reason) play survives as an artifact, despite an unevenly acted and directed production. 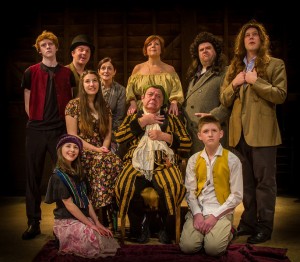 Constance Congdon’s “modern adaptation” is framed as a play-within-a-play. Holmdel’s atmospheric barn-style building, bare to the walls, is transformed into a playing area with a few scenic pieces and props, set in place by a trio of apprentices, about whom more below.

The centerpiece is a straight chair (why not the specified large armchair?) and footstool to which Argan is confined for most of the two acts. Thus the ordinarily physically expressive Kroll is limited to vocal huffing and puffing, which he does well enough, but which, under the loose-limbed direction of Tom Frascatore (with Dave Murray’s assistance), is overwhelmed by the antics going on around him.

In order to ensure ongoing medical care, Argan plans to marry off his daughter Angelique (Ava Portman) to his doctor (Mike Hegarty)’s son (Dan Johnson), himself an incompetent physician-in-training. Angelique favors Cleante (Topher Friedel), who returns her love. Further complicating the issue, Argan’s wife Beline (Carole Darche), sensing Argan’s imminent demise (wrongly, as it turns out), enlists the aid of a lawyer (Bill Rogers) to gain control of the family wealth. Individually and in groups, these folks bluster in and out of character over the play’s two acts. 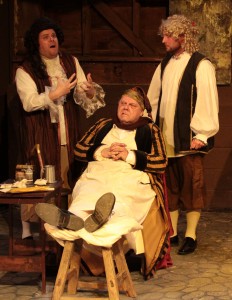 Coming to the rescue of this 17th-Century dysfunctional family is a stock Moliere character, the wily servant. Rose Pedone plays Beline’s maid and Argan’s nurse Toinette, successfully blending period acting with a modern sensibility. “It’s your task,” she’s told, “to see I do not die today.” “I’m on it,” she tosses off, as if that phrase was in use 350 years ago. Capturing dissimilar theatrical manners in one performance is a particular talent, and Ms. Pedone (an Equity pro) pulls it off with deceptive ease. She even survives Toinette’s masquerade as a male physician.

The translation I had read included no explicit references to flatulence and its aftermath or to enemas, functions that are prominently featured in Ms. Congdon’s adaptation. I guess she thinks those topics are funny, and maybe they are…to twelve-year old boys.

While “The Imaginary Invalid” is a surprising choice, Holmdel Theatre and producers Geoff Shields and Grace Modla deserve much credit for taking the Moliere plunge. Over the years I’ve seen Shakespeare at Holmdel as well as Shaw, Ionesco, Stoppard, Oscar Wilde, even Sophocles, for heaven’s sake. All the biggies – well, except for Neil Simon.

About those apprentices: Tenth-grader Jon Nielsen, middle-school senior Wes Swan and perfect pixie Ruby Riggio, 12, are excellent in integral roles. Mostly silent, they are the links to the play-within-play structure, scurrying about as they intentionally (and amusingly) screw up sound cues and scenery drops. Further kudos to Holmdel for including the youngsters in the show.

Through April 12 at the Duncan Smith Theater on the Holmdel High School grounds, Holmdel NJ. Fri and Sat at 8pm; Sun April 6 at 2pm. Tickets ($22): www.holmdeltheatrecompany.org