“Kung Fu,” David Henry Hwang’s Bruce Lee bio-play at the Signature Theatre complex on West 42nd Street, traces Lee’s emergence from a martial-arts teacher in Hollywood to a superstar in movies filmed in Hong Kong (the early ones) and Hollywood. Born in San Francisco’s Chinatown in 1940, he was raised in Hong Kong by his traditional father, a background illustrated in the play through flashbacks, before returning to the U.S. at age 18. 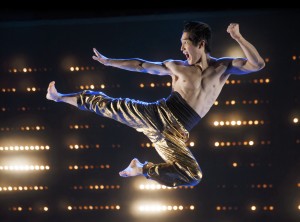 Cole Horibe, who plays Lee, is a Taekwondo Collegiate Olympic medalist and Kung Fu graduate, and the first act of “Kung Fu” is highlighted by intricate martial-arts routines that are more thrilling live on stage than any that are edited for film. Credited to Fight Director Emmanuel Brown, who also appears in the play, and to Choreographer Sonya Tayeh, the routines are as stylish as any Broadway musical’s – and more vigorous than most.

Horibe is a more-than competent actor as well; details of Lee’s personal life – his marriage, his aspirations, financial problems and more – are neither exaggerated nor understated. Act two is heavier on biographical details (and on his over-acted father) than on exhibiting Lee’s martial-arts skills, with emphasis on Hollywood’s skittishness toward casting “Oriental” actors, even in Asian roles. (David Carradine in TV’s “Kung Fu,” anyone?)

Finally, there’s a posthumous reconciliation of sorts with his father and acceptance of his own identity and ethnicity that enables him to embrace non-Hollywood film making. Fittingly, the play ends with him on the cusp of the successful career that ended all too soon. Bruce Lee succumbed to a cerebral edema in 1973 at age 32.

Will Eno’s “The Open House,” also at Signature, is a 90-minute one-act play, as were Eno’s “Thom Paine [based on nothing]” and “Title and Deed,” both of which established Eno as a master phrase-maker. Consider these thoughts on failed relationships: “She thought, wrongly, that she could tell me anything” from the former play and “Lauren and I saw eye-to-eye for a while, but we were not to be, so I went my separate ways” from “Title and Deed.”

Unlike both those one-actor plays, “The Open House” has a cast of five…or nine. Well no, really five. To explain in any detail is to play the spoiler, so just know that four of the five superb actors each take on two roles. And the fifth, by virtue of an imposed attitude adjustment half-way through, might as well be two different characters.

The dysfunctional family may be a dramatic cliché, but the one that gathers for this wheelchair-bound patriarch is a conduit for a stream of Eno-speak that’s a delight to the ear and soul food for the brain. Non sequiturs, amusing on their own, make sense a few seconds later, although there’s precious little time for contemplation between them.

Dad is a font of hostility, finding fault where none exists. “Don’t call me dear,” he spits at his wife out of the blue. “I didn’t,” the befuddled woman replies. “I know; I’m just saying don’t.” Why the son, daughter and family hanger-on would even want to appease the old crank is anyone’s guess, but his announcement (that generates the role-doubling) is a bombshell. Directed by Oliver Butler with the keen realization that minimal movement enhances Will Eno’s dialogue, “The Open House” is quirky, engrossing and, despite some biting harshness (or because of it), very funny.

“Kung Fu” runs through April 6 and “The Open House” through March 30, both at the Pershing Square Signature Center, 480 West 42nd Street, NYC. For Tues-Sun performance schedules and tickets: 212-244 7529 or at signaturetheatre.org