“Bridges” in NYC:   It’s 1965 in Winterset, Iowa. Italian war bride Francesca Johnson is home alone while her husband and teen-aged children are showing their prize pig at the State Fair. Itinerant photographer Robert Kincaid appears, needing directions to a covered bridge he wants to shoot for a National Geographic spread.

An immediate attraction impels Francesca to guide Robert to the bridge in person, and one hour of stage time later, she’s guiding him again, this time up the stairs of the Johnson homestead and into her bed. 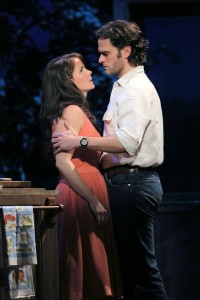 That’s it, and sudden as it is, one does not doubt the chemistry between the two, in the persons of lovely Kelli O’Hara and hunky Steven Pasquale, whose Francesca and Robert share four idyllic days. Only when the question of her riding off with her shutterbug lover or staying with her sod-buster husband arises does soap-opera melodrama take over. There are only so many ways to parse Francesca’s dilemma, and Marsha Norman’s book of the musical adaptation of Robert James Waller’s novella re-hashes them over and over.

Francesca’s conflict effectively ends early in act two in a creatively crafted scene outside an ice cream parlor. Staged twice, the scene resolves the clash between heady romance and earthbound reality that you knew was coming, even if you’d not read the book (or seen the 2005 Clint Eastwood-Meryl Streep movie).

Up to the point where Francesca makes her decision outside that ice cream store, the love story had evolved naturally and believably, wonderfully acted and sung by O’Hara and Pasquale. Ending the tale there would have conveyed more than the remaining – and redundant – 45 minutes.

Much of Jason Robert Brown’s music is pleasant. Faint praise, maybe; but with the ten-piece orchestra half strings, the overall tone is one of pleasure, enhanced immeasurably when Ms. O’Hara’s vocal instrument is added to the mix. She’s a flawless singer with remarkable emotional range. The show opens with Francesca’s narrative prologue, sung beautifully and hinting at what’s to come.

O’Hara’s acting thrills as well. It’s not that you can’t take your eyes off her, just that you are advised not to, lest you miss moments like Francesca’s reaction to Robert’s first touch, a casual brush of her arm as he passes. She freezes for one second and looks down at her arm for another. You’ll feel the tingle in your own arm.

I guess an all-consuming, life-long devotion can fully blossom in just four days, but a reader’s review of the book on Amazon.com puts that fantasy in perspective:  “The author ignores the fact,” she wrote, “that every man (even the jerkiest of jerks) can be wonderful for the first four days.” Ouch.

A “Date” in Long Branch:  At the start of “Date of a Lifetime,” Jamie LaVerdiere and Trisha Rapier, who comprise the entire cast, poke fun at the “litany of bad types or just freakin’ nuts” who attend speed-dating events. Among them are a woman who obsesses about her five cats and a man who needs his date to be skinny so as not to tilt his water bed.

Then there are the slightly more normal lonelyhearts portrayed by Mr. LaVerdiere and Ms. Rapier. Paired-off at Rotate-A-Date on Manhattan’s upper west side, Marvin and Katie have issues of their own, which play out in Carl Kissin (book and lyrics) and Robert Baumgartner’s (music) clever new musical at New Jersey Repertory Company on Broadway in Long Branch. 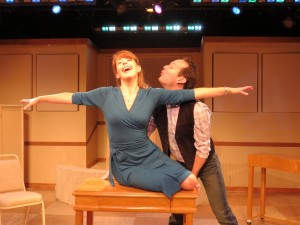 The two spot each other across the stage (a la Tony and Maria) and symbolically fit their table tops together like pieces of a jigsaw puzzle. Mutual flirtation leads to an exchange of imagined life-long scenarios that fill the next 90 minutes, which is about 82 minutes longer than a speed-date.

It’s also about 12 minutes longer than the play needs to be, but portions of the fantasies ring true. His projected dating scenario includes a 3-D movie, musing at MOMA and admiring the view from the High Line, all played amusingly on Jessica Parks’ spare set.  In rapid succession, Marvin envisions them moving in together, marrying, raising a child and so much more (including some morbidity), that Katie’s similar set-up comes off as anti-climactic, hardly the fault of either actor.

Carrying half of a two-character play, no less a musical, is heavy lifting, and LaVerdiere and Rapier certainly work hard at it. Maybe too hard, as if, with director Marlo Hunter urging them on, they are compensating for the absence of a chorus line. Musical director Daniel Rein provides expert accompaniment on one piano that really does compensate for the lack a larger ensemble, but most of the musical numbers lend themselves to frenetic vocal delivery. The intimacy of the two-person situation and of the NJ Rep venue itself would benefit from some restraint. (A toned-down reprise of the raucous “Roller Coaster” number makes the point.)

After Marvin and Katie have laid out their visions for the future, there’s a final scene that casts doubt on whether or not they’ll have a real date. Anyone who hasn’t already figured that out should stay at home – on a waterbed with five skinny cats.