A Play, a Concert and a Wedding

THE PLAY: My liberal social and political values are firm, but even I was taken aback to see, in the “Pinkolandia” montage of purported “fascists” Nixon, Reagan and Kissinger, the image of…Scrooge McDuck!

It had never occurred to me that Huey, Dewey and Louie’s uncle supported repressive dictatorships. But then I am not the pre-teen daughter of parents who fled their native Chile in the wake of the 1973 overthrow of that nation’s duly elected socialist government. Her political awareness is a central theme of “Pinkolandia,” at Two River Theater through March 23.

The family, settled in Wisconsin in 1982, has put the coup d’etat behind them until 12-year old Beny, prompted by her Tio Ignacio’s disclosures about the brutal Augusto Pinochet regime that superceded Chilean President Allende’s overthrow and suicide, takes up the cause.  Playwright Andrea Thome uses Beny’s attempts to educate her classmates (in one of the play’s best scenes) and her younger sister Gaby to educate the audience as well. 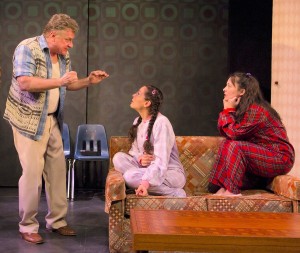 The Pinochet years were marked by imprisonment, torture and ‘disappearance’ of political dissidents, and support for the dictator by our CIA has been well documented. Portions of the play amount to a polemic on the subject, and while we do not question Ms. Thome’s passion, invoking the image of Adolf Hitler with those U. S. officials (and Tio McDuck) is a bit jarring.

“Pinkolandia” is not all politics. Acted to perfection by the adult Maria Helan as Beny and Andrea Morales (Gaby), the sisters are totally convincing – and eminently lovable.  They indulge in fantasies (the polar bear is imaginary), share confidences and comfort each other even as they occasionally spat. Ah, sisters.

Puerto Rico-born director Jose Zayas and the Chilean-Costa Rican playwright create an oasis of South American culture in the unlikely setting of Wisconsin. 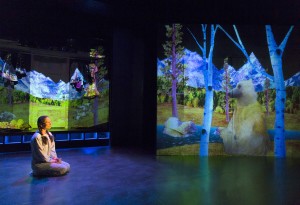 About a quarter of the dialogue is in Spanish, and judging by the laughter from some in the audience, so is about three-quarters of the comedy. Any blanks endured by English-only speakers are more than offset by the appeal one hopes the play will have to bi-linguals. Whatever their politics, they will be warmed by the close family relationships portrayed in “Pinkolandia.”  I certainly was, even without entendiendo todo el dialogo en espanol.

THE CONCERT: The Toronto Symphony Orchestra’s classical musicianship is a given, and when applied to film scores it is something marvelous to behold. It’s a movie-lover’s delight.

With the orchestral background deleted from well-known motion pictures, the 90-piece TSO plays it live, synchronized perfectly with the movie projected above the orchestra. Only the musical score is lifted; all dialogue, song lyrics and background sounds (gunshots, etc.) are intact.

Last year they did “West Side Story,” and Leonard Bernstein’s score never sounded better, nor, for that matter, had the movie ever seemed so good.

This year’s entry, last Valentine’s weekend, was “Casablanca,” with the Orchestra playing Max Steiner’s glorious background score while the film was shown overhead. It was a new and inspired way to see the 1943 Oscar-winner, universally acknowledged as one of the greatest films of all time.

Seeing “Casablanca” as-is on a theater screen would be special enough. But Bogie and the luminous Ingrid Bergman together with the Toronto Symphony accompanying the film was awesome.

In April 2015, conductor Steven Reineke and the TSO will accompany Disney’s “Fantasia,” eight animated segments set to compositions by the likes of Beethoven, Bach and Tchaikovsky. The TSO performing that score live while Mickey Mouse cavorts on a big screen above will be worth a trip to Toronto.

THE WEDDING:  Thirty years ago I introduced Daryl Nelson to Linda Simms. Now their son is at Spring Training as the Cincinnati Reds third-baseman. Following are excerpts from my coverage of his wedding for an Atlanta-area newspaper:

Brittany Freeman and Christopher Nelson were married on Saturday, December 14 at the Four Seasons Hotel in Atlanta by Reverend James White of Millville, New Jersey, a cousin of the Nelson family. 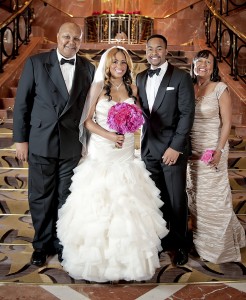 The groom’s parents with the bridal couple (Milanes Photography)

The bride, 27, graduated from Savannah State College with a degree in Political Science. She looks forward to pursuing a Law Degree.

The groom, 28, graduated from Redan High School in Decatur, where he was named Louisville Slugger’s 2004 High School Baseball Player of the Year in the state of Georgia. He was drafted #1 by the Colorado Rockies and has seen action with the Rockies, the New York Yankees and, in 2013, the Los Angeles Angels. He is signed for the 2014 season with the Cincinnati Reds.

Chris is the son of Daryl Nelson, a Decatur Real Estate broker, and Linda Nelson, Office Manager of the Division of Science and Mathematics at Morehouse College in Atlanta.