Anyone who doubts Two River Theater Company’s commitment to the Red Bank community should try to get a ticket to one of the “As You Like It” student matinees. They have been sold out for weeks, and the kids fortunate enough to hold tickets are in for a treat. The anxieties of the play’s young characters haven’t altered since Shakespeare wrote about them 400 years ago. Every student and every elder with a memory will see themselves in it.

Over fifty percent prose, “As You Like It” is highly accessible, and Two River’s staging is clear, expansive and very funny. Modern dress strips it of some visual appeal, but set largely in a forest, casual costuming is, I guess, appropriate (“casual” being a generous description). 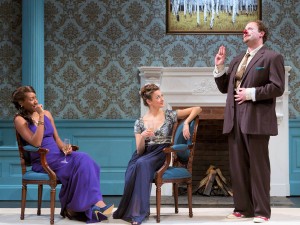 At Court (from left): Miriam A Hyman as Rosalind, Sara Topham as Celia and Brendan Titley as Touchstone. [Photos: T. Charles Erickson]

Rosalind, smitten with Orlando, is banished with her father, Duke Senior, to the Forest of Arden where she masquerades as male Ganymede and proceeds to tutor the equally love-struck Orlando in the art of courtship. Sundry other couples provide rustic comedy, until [spoiler alert] there’s a happily-ever-after ending.

Simple, yes; but hardly simple-minded. “As You Like It” is layered with romance, music and wit, from the sublime to the bawdy.  Director Michael Sexton mines those elements with great success and also, aided by some wonderful performances, reveals a facet of the play that had eluded me until now.

The centerpiece might be Rosalind and Orlando’s intricate path to one another, but the play is also about girlfriends. Rosalind’s cousin Celia accompanies her into exile. “Pronounce that sentence now on me,” she tells her father, Duke Frederick, after he banishes Rosalind. “I cannot live out of her company.” There could not be a closer couple of gal pals than those heart-warmingly portrayed by Miriam A. Hyman (Rosalind) and Sara Topham (Celia). As many productions as I’ve seen, I’ve never been as much aware of the deep empathy and emotional bond that the cousins share. BFFs for sure. (The girls in the student groups will love them.) 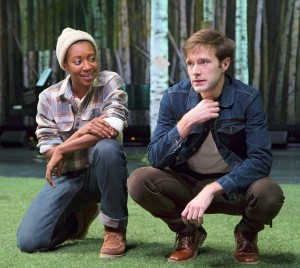 In the Forest of Arden: Miriam A. Hyman as Rosalind as Ganymede and Jacob Fishel as Orlando

Could Ms. Hyman’s terrific impression of a hipster guy be too good? The pretense is as polished as if the character had rehearsed it. Orlando questions Ganymede’s accent as “something finer” than a forest dweller’s, but Hyman’s Ganymede speaks in the Elizabethan equivalent of neighborhood jargon, without a trace of Rosalind’s courtly origin. I missed sharing some of Rosalind’s insecurity over carrying off the deception. That noted, Hyman gets her/his laughs.

Jacob Fishel, switching gears from last season’s Henry V, is an appealing boyish Orlando, whose bad-guy brother Oliver, cleaning up his act in time to find true love with Celia, is well played by Ben Diskant. Philip Goodwin is fine as both Dukes, roles that are often doubled. Brendan Titley and Myra Lucretia Taylor stand out as Touchstone, Rosalind’s faithful court clown (with red nose to prove it),  and his goatherd girlfriend Audrey.

Leighton Bryan turns in a gem as Phoebe, who flips over Ganymede at first sight. A veritable Energizer Bunny, she’s as cute in a peasant skirt as she was glamorous last year in “Present Laughter”’s shimmering backless number. (Tilly Grimes costumed both shows.)

Lord Jacques (Jay-queeze: Brit, not French), is famously “melancholy,” but the imposing Geoffrey Owens is anything but. Neither pensive nor sad, he delivers the “Seven Ages of Man” speech while strutting among the exiled Duke’s followers. It’s more an oration than the rumination we’re used to, but no less worth listening to. So okay, a Jacques who’s not a downer.

Brett J. Banakis’ set design makes good use of the wide Two River stage, as does director Michael Sexton. The stylized forest background leaves plenty of room for the actors to explore spatial as well as personal relations.

One more note: the cast is inter-racial. Some of the characters are white, some black. In a good sense, it adds a dimension to the play. In an even better sense, you might not even notice.

I cried with Miriam [Rosalind] and Sara [Celia]; laughed with Touchstone and wonderful Audrey, Phoebe and her rustic gang; liked Jacob [Fishel] and Geoffrey [Owens] courtly [Orlando] and Falstaff-like [Jacques]; admired the set, the dancing and the Elizabethan-like music.  More middle school and high school students as well as adults should enjoy different types of Shakespeare productions in our area! We need them!