Admit yourself to “Admit One”

It’s all too common for inept directors and/or actors to turn a really good play into a disappointing theater experience. Think about some of the Shakespeare you’ve seen. Occasionally, however, top-notch direction and acting can take middling-good material to a higher level. Case in point: Wendy Yondorf’s “Admit One” at New Jersey Repertory Company in Long Branch.

On the one-to-ten scale, the play is close to a seven. But as directed by Karen Carpenter and acted by Ames Adamson and Catherine LeFrere, it’s nudging a nine. 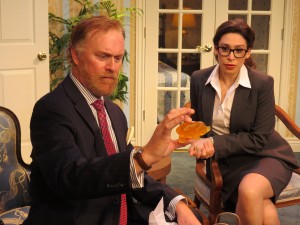 Howard Everett (Adamson) has arranged a meeting with Mary Sue (LeFrere) in a suite at the Waldorf Astoria. Mary Sue is an admission officer at Giddings University, a fictitious higher-learning institution which, for the purposes of the play, ranks above the Ivies (not to mention Tufts).

Everett’s goal is admission for his son; his leverage is his long-standing financial support of Giddings; his obstacle is Mary Sue, who deems the son unqualified, especially after learning of an untoward incident between the son and a young woman.

The play dissects and discusses off-the-wall qualifications for admission, some of which may (or may not) be products of the playwright’s imagination. (Debate team? Big Deal. Lacrosse and good grades? So what. A lingering fatal disease? You’re in.)

Denigrating references to actual colleges are amusing, and byplay between the at-odds characters, while repetitious, is at least consistent. But please: resorting to New Jersey jokes is like wearing a Lazy Writer sandwich sign. (The Jersey jokes in “Beautiful” on Broadway are equally lame, but at least there’s no Chris Christie gag as there is in Long Branch.)

Mary Sue is nervous at the start, looking and acting like a librarian out of her stacks. It’s her first time in NYC, although after seven years evaluating applicants for high-profile Giddings (location unspecified), that’s a stretch, as is her being awed by the unimposing Waldorf digs. LeFrere hits her stride when Mary Sue and Howard get down to business. She plays the character’s increasing confidence well; the academic Mary Sue won’t be bullied or bought off, and her impulsive correction of Howard’s grammatical gaffes merits recurring chuckles. (Shouldn’t she pronounce the n in the oft-repeated badminton?) 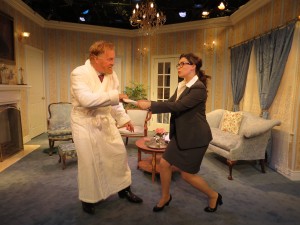 Adamson fits comfortably into the role of the 23rd richest man in the world, complete with neatly trimmed beard and frustration at not getting his accustomed way. He’s as much a pleasure to listen to as he is to watch; his naturally sonorous voice suits the character.

Directed at a brisk pace by Ms. Carpenter, whose “Steel Magnolias” at Paper Mill Playhouse in 2008 defined that play for me, Adamson and LeFrere thrust and parry as if they’d been at it for years. The characters’ relationship shifts several times, but the actors are never out of sync.

The play stumbles over itself toward the end, with some poorly-defined revelations, and it’s overlong, even at 95 minutes. But this is, after all, the world premiere at a venue whose stated purpose is the ongoing development of new plays. I might enjoy checking back later in the run, but even as Ms. Yondorf’s play stands, the Carpenter-Adamson-LeFrere team brings it home. “Admit One” is very entertaining.