It’s still January, right? So…not too late to re-cap last year’s theater-going. In all, I attended 121 productions in 2013, broken down as follows – with bests/favorites noted:

From “Picnic” in January, through to “No Man’s Land” in December, 36 of the 121 were Broadway shows. Among the plays, re-imagined revivals of “The Glass Menagerie” and “Twelfth Night” were tops. Cherry Jones’s Amanda, and especially Zachary Quinto as Tom, broke new ground in Tennessee Williams’s poetic masterpiece, and Mark Rylance headed an all-male cast in the swiftest and funniest possible “Twelfth Night.”

As for musicals, I liked “Kinky Boots” and loved “After Midnight.” But the Cirque-infused “Pippin” excited me as much as any musical has in recent memory. Having seen an understudy as Leading Player, I was asked back in order to see Patina Miller, who had been nominated for an Outer Critics Circle Award. As good as understudy Stephanie Pope was (and she was) Patina knocked it out of the park, winning my OCC vote – and the Award. 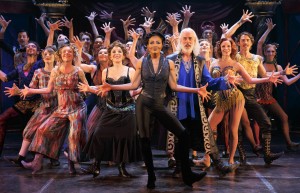 Close behind the Broadway count, 33 of my shows were off-Broadway. Revivals again make the cut, with “All In the Timing” tied for top recognition with the Public Theatre offerings in Central Park: a slap-sticky “Comedy of Errors” and an inspired musical update of “Love’s Labour’s Lost,” set at a college reunion. Among new works, “Bad Jews” (non-observers of religion and culture) was alternately harrowing and hilarious, with a breakout performance by Tracee Chimo as a judgmental sister prone to hysterical outbursts. 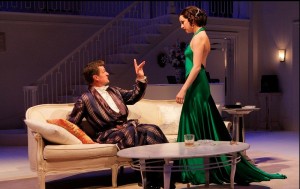 Reviewing Ontario (Canada) theatre for several U. S. newspapers, I saw 16 plays at the Stratford Shakespeare and (George Bernard) Shaw Festivals combined. “Measure for Measure,” “Othello” and “Romeo and Juliet” (one of three seen during the year) at the former and “Major Barbara” at the latter were examples of how both Festivals honor their namesakes, but ‘outsiders’ impressed me most: Stratford’s “Fiddler on the Roof” was the most musically and emotionally satisfying I’ve seen, and the Shaw’s “Lady Windermere’s Fan,” which I’d never before seen, brought me up short with its dramatic exploration of woman-to-woman loyalty and sacrifice.

(Stratford’s “luminous” Juliet, Sara Topham, is appearing this month and next in “As You Like It” at Two River Theater in Red Bank NJ.)

I’m tempted to declare a ten-way tie among that number of community shows seen in 2013. The amount of volunteer time and energy devoted to these productions is not unappreciated here. Staging musicals such as “The Music Man” (Phoenix Productions) and “Company” (Main Street Theatre) as well as worthy plays like “Little Women” (Holmdel Theatre) and “The Dixie Swim Club” (First Avenue Playhouse) is its own reward, for audiences and participants alike.

We’re at 113; the remaining eight were in the “other” category, which included Cirques, Fringe plays and one real beaut: the Toronto Symphony Orchestra’s performance of the “West Side Story” film score, with the movie projected above and behind the 100-piece orchestra. The dialogue and special effects (gunshots, etc) remained, but the music had been digitally removed and was synchronized, live, to the screening. It may be heresy to end this column with praise for a movie, but with the TSO accompanying him, even Richard Beymer sounded good.