“Beautiful” and “Godot” on Broadway

“Beautiful: The Carole King Musical” is like the little girl with the curl. When it’s good it’s very good (the first act) and when it falters (act two) it’s…well, not so good. The difference lies in the proportion of music to book. Act one is 80/20 music. Act two reverses that ratio, but considering the stream of nostalgic gems that flow through Beautiful, and Jesse Mueller’s terrific performance, zeroing in on the book is hardly fair. 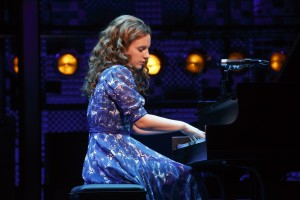 Carole (Ms. Mueller) “never meant to be a singer.” What she wants, against her nagging mother’s advice, is to write songs. Music publisher Don Kirshner introduces her to aspiring lyricist Gerry Goffin, whom she marries at 17 after becoming pregnant.

The King-Goffin marriage did not survive, but together in the late 1950s and early ‘60s they were a virtual hit machine. The Drifters’ chart-topping “Some Kind of Wonderful” was theirs, as was “Will You Love Me Tomorrow” for the Shirelles, and Little Eva’s hit “The Locomotion.”

“Beautiful” is similar in form to “Jersey Boys,” in that many of the songs emerge from the story. Unlike the Four Seasons musical, though, a variety of individuals and groups are represented in addition to Carole herself. Neil Sedaka and the Righteous Brothers make the cut, as do those mentioned above.

The role is Jessie Mueller’s springboard to stardom. She enchants everyone in her presence. Several numbers, including at her iconic Carnegie Hall appearance, begin with Carole singing to her own solo-piano accompaniment, and as the super 12-piece orchestra fades in, Ms. Mueller swells up along with it. Her Carole King is… beautiful.

The latest Broadway incarnation of Samuel Beckett’s “Waiting for Godot” with Ian McKellen and Patrick Stewart has been extended to March 30. McKellen and Stewart are as bonded a couple as Laurel and Hardy, and the good time they appear to be having spills over into the audience. The play still does not have a linear plot, but is a delight to sit through. 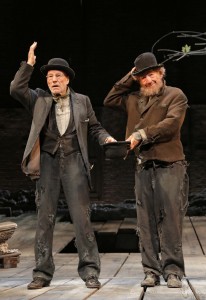 Two apparent tramps, Estragon, (nicknamed Gogo and played by McKellen), and Vladimir (Didi, Stewart), are waiting for the mysterious Godot, who never arrives. The two banter and quibble, largely in non-sequiturs, reacting to – or ignoring – one another’s pronouncements. Another pair, would-be aristocrat Pozzo (Shuler Hensley) and his tethered slave Lucky (Billy Crudup), contribute some equally strange commentary before easing on down the road.

There are many different theories about who or what Godot represents. Of the 1956 original, New York Times critic Brooks Atkinson was “fairly certain that Godot stands for God.” But Beckett called it a firmly atheist play, which doesn’t mean, of course, that Gogo and Didi are not waiting for God. Either way, calling Godot God doesn’t make it so. Pressed for clarification, Beckett, who died in 1989, offered only “I meant what I said”. Thanks a lot.

For all its verbal dexterity, “Waiting for Godot” depends on physical comedy, and while McKellen, Stewart, director Sean Mathias and company do not clarify the text any more than any other “Godot” I’ve seen, it is the most fun of them all.

Okay, I give up

Her initiation into the practice, the act itself and how swell it made her feel are described in some detail, but the piece is so poorly set down and so blandly performed by Laura Campbell, fussing throughout with her peignoir, that the whole enterprise is as much a turn-on (or off, depending) as an episode of The Simpsons.

Laura Campbell in “The Surrender”