Looking in on acting class…

Until last week, I’d never attended Holmdel Theatre Company while a football game was in progress on the field adjacent to the theater, with the PA announcer and the band providing muffled accompaniment to the play. It was a distraction, to be sure, but the Holmdel troupers soldiered on. They dealt with the play…as will I:

The most telling line in “Circle Mirror Transformation,” set in an acting class in a Vermont town, is uttered by 16-year old class attendee Lauren. “Are we going to be doing any real acting?” she asks after yet another set of Method-y exercises. The question is supposed to be funny, but it points up the flaws in Holmdel’s production of Annie Baker’s play.

The Holmdel performers are largely blameless for a conceptually skewed “Circle Mirror.” The play is not about the teaching of acting; it’s about the people in this particular class – their personalities, concerns, hang-ups and relationships, both within and outside the class. Here, the exercises (which are enacted very well, btw) take center stage while character delineation is short-changed.

Director Kathy Hendrickson’s bona fides are considerable. She’s been endorsed by no less than Mike Nichols as both director and teacher. No doubt she could even play the teacher in “Circle,” but directing it from that viewpoint doesn’t serve the play.   “Circle” is deceptively slight. The coach and four students are ordinary souls without delusions of professionalism. The intimacy of an acting class can strain existing bonds and engender new ones. The success of the play depends upon careful etching of the characters’ personalities and relationships to the others. 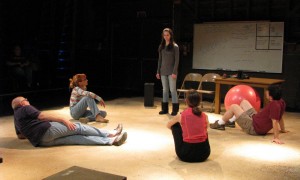 Here, authority figure and teacher Marty (Cody Dalton) is insecure about her instruction, as if she’s making up some of the exercises on the spot. James (Tom Frascatore), Marty’s husband, is distressed over his relationship with his adult daughter, but the strain on him and on their marriage barely registers, due to de-emphasis (and failure to project, not to be blamed on the neighboring rah-rah).

Former NYC actress Theresa (Karen Collazzo) has a pity-affair with recently-divorced Schultz (Dave Murray). Ms. Collazzo is a good-looker for sure, but Theresa should be come-hither sexy, a quality not in evidence here. She and this woebegone Schultz sneaking off to the rest room for a quickie before class? Not hardly.

Sixteen-year old Lauren (Devlin Stark, herself 13) is the most interesting character. She’s a girl of few words, but she observes intently. The important point about her class tuition gets lost in the shuffle, but significantly, playwright Baker has Lauren wrap up Circle’s 90 minutes in a final exercise. Lauren, via the now-expressive Ms. Stark, finally does some “real acting.” In an improvised ten-year-later scenario, she also ends up in the play’s happiest relationship – with a fortunate veterinarian named Todd.