Welcome to the Cotton Club: “After Midnight”

Broadway’s After Midnight ends with “Freeze and Melt,” an ensemble number that mimics that title’s postures. It’s amusing; it’s electric; it’s sensational. Then comes the curtain calls and a well-deserved standing-O.

But wait; it ain’t over yet. The star of the show has one more number. That star is the band, sixteen marvelous musicians selected by Wynton Marsalis from his Lincoln Center Jazz All-Stars. Broadway musical audiences routinely exit during the “chase music,” but nobody moves here except to bop-out to this post-show “Rockin’ in Rhythm.” It’s a barn-burner. 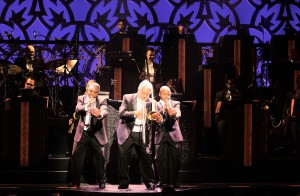 After Midnight is an expanded version of Cotton Club Parade, which sold-out City Center in 2011 and 2012. It re-creates the Cotton Club ambiance when Duke Ellington held sway in the early 1930s. Built around two dozen numbers identified with Ellington, the show incorporates passages from poet Langston Hughes, smoothly pronounced by Dule Hill, beginning with “Harlem’s heartbeat was a drumbeat.” Along with stunning guest star and “American Idol” winner Fantasia Barrino, 25 super-talented performers and that world-class band create 90 minutes of jazz perfection.

It’s one highlight after another. The opening number, “Daybreak Express,” is a visual as well as musical treasure; dancers all in white against the black-tuxed musicians couldn’t be classier…or sexier. Fantasia’s take on “I Can’t Give You Anything But Love” is like fine crystal, and “Stormy Weather” is as soulful as you’ll ever hear it.

Dule Hill fronts a cheerful “I’ve Got the World on a String” (Who knew the “West Wing” daughter’s beau was a song-and-dance man?), and three agile chirpers harmonize “Between the Devil and the Deep Blue Sea” like clockwork. Adriane Lenox could not be more different here from her intense Tony-winning mother in Doubt. Her “Women Be Wise” and especially “Go Back Where You Stayed Last Night” are comic gems.

And Dule Hill fronts the cast

Listing the rest of the program would exhaust a thesaurus of superlatives, but not mentioning Julius “iGlide” Chisholm, whose serpentine dance moves complement the slick gyrations of Virgil “Lil’ O” Gadson, would be a sin of omission.

From jazz ballet to a cornucopia of tap, featuring ‘Tap Mathematician’ Jared Grimes and others, After Midnight is a study in perpetual motion, urged on from beginning to end by conductor Daryl Waters’ sweet sixteen. The band’s risers move downstage for their featured numbers. Just watching as they slide toward the front of the stage is a thrill; then they play their music. Mercy.