A Tricky “Map of the Soul” at Two River Theater

“A Map of the Soul” is comprised of two 80-minute segments, written and performed by Martin Moran. “The Tricky Part” and “All the Rage” are programmed separately at Two River Theater through November 17, with several opportunities to see both segments on the same day. Either segment can be seen without the other or the two can be seen in either order, but references in “Rage” to first-written “Tricky” might be head-scratchers. I saw them both last Sunday.

The press material refers to both solo pieces as “plays.” To the extent that each unfolds on a theater stage and that Moran is a professional actor, the definition holds…barely.

According to Moran, “The Tricky Part” is “the story that will not let me go” and, thus compelled, he launches into it. Labeling it a play is a stretch, but pinning it down to some other form is elusive. It is the story, described in some detail, of Moran’s sexual abuse by a Vietnam vet and camp counselor who insinuated himself into the then 12-year-old’s life with camping trips and the like. 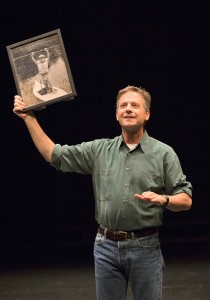 Martin Moran with photo of himself at age 12 (Photo: T. Charles Erickson)

It’s not a confessional, although Moran’s recurrent references to Catholicism bring that sacrament to mind. Nor is it an expose, the facts having been revealed in Moran’s 2005 book, “The Tricky Part: One Boy’s Fall from Trespass into Grace.” What then? The book’s sub-title is a clue.

The personable Moran, now 53, begins with humorous observations about his Catholic schooling by strict nuns (easy targets), and describes becoming influenced by “Bob.” He tells how, at his age 40, he learned of a family history of abuse, which led him to face his own past, including two suicide attempts, and to seek out his abuser.

It unfolds in a conversational manner, ably overseen by director Seth Barrish, but when it comes to the fairly explicit first molestation, Moran reads from his book, as if to distance himself from the sordid incident. The final third of “The Tricky Part” is about his 40-years-later meeting with Bob, now invalided in a VA hospital. How Moran interacts with Bob is the point of his oral presentation; in simple terms, the “tricky part” is figuring out how to deal with the bad guys.

Specific to how Moran chooses to deal with his particular history, the piece might be questionable as entertainment, but disturbing as it is, it’s an engrossing 80 minutes.

“All the Rage” also begins with humor, this time surrounding his relationship with his step-mother (easy target II) and how it played out at his father’s funeral, leading to Moran’s ultimately successful efforts to purge himself of anger. As an author, and apparently in person, he says he’s “the go-to guy on forgiveness.”

Most of “Rage” is an extended anecdote about helping an African immigrant qualify for resident status in the U.S. The French-speaking fellow (Moran translates back and forth) had been mis-treated in his home country, but if “Mandela came out after 27 years in prison and forgave,” so can we.

The tale Moran spins in “Rage” is not un-interesting, but the message, “forgiveness is the way to save yourself,” might be more appropriate from a pulpit than from a stage.

“The Tricky Part” and “All the Rage” run through Nov 17 at Two River Theater, Bridge Ave, Red Bank. For performance schedule and tickets, go to www.trtc.org

Post-play discussions, featuring Mr. Moran and guest speakers, follow every performance. Also, the Two River program booklet includes sources for in-person counseling and 24-hour help lines, as well as information about Project Unbreakable, whose mission is to increase awareness of sexual assault issues and encourage healing through art. If one troubled individual is moved to reach out, it really doesn’t matter whether “The Tricky Part” is or is not a play.