Pay a visit to “Our Town”

Playwright Thornton Wilder did not offer “Our Town” as a picture of life in a New Hampshire village. Rather, he wrote, “it is an attempt to find a value above all price for the smallest events in our daily life.” He also decreed that there be no curtain or scenery – just, at the start, an empty stage in half-light. If faithfulness to a playwright is any measure, the Shakespeare Theatre of New Jersey’s “Our Town” approaches perfection. While there is a much-admired re-imagining of the play making the rounds, this return to “original practices,” free from veneer, is flat-out wonderful.

If everyone who ever appeared in a New Jersey high school or community theater “Our Town” attended a performance at the Shakespeare Theatre, it would run for months, and deservedly so. After a smattering of ill-advised first-act histrionics, mentioned and dismissed, the production is a master class in less-is-more Theatre. Masterfully directed by Joseph Discher, and acted with an ease that belies the effort, this simplest of stories is as engrossing as any thriller.

The cycle of life is represented in three compact acts that span the years 1901-1915. Nothing that happens between the birth of twins, bringing the population of Grover’s Corners to 2,642, and the heart-tugging final scene in the town cemetery comes with a sense of urgency. But every occurrence, every utterance, is essential. 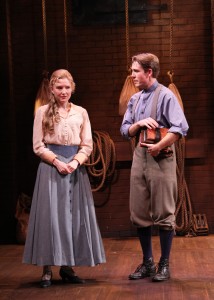 The core story of George Gibbs and Emily Webb’s courtship and marriage is played out against seemingly trivial everyday happenings. George and Emily’s parents – a doctor, a newspaper editor and their homemaker wives – are virtually interchangeable. They are unassuming people whose conversations rarely touch on anything that, if described here, would grab your interest. But it’s deceptive. The point is that they care. There’s not a boring or wasted word in Wilder’s text.

In the absence of scenery and props, settings are described by the Stage Manager, a sort of narrator, who also plays a couple of small roles. Neither preachy nor overly folksy, Philip Goodwin adds low-key color commentary in the most natural manner imaginable. (His and others’ authentic New England accents are consistent throughout.)

Malachy Cleary and Marion Adler are solid as Doc and Mrs. Gibbs, as are James Michael Reilly and Allison Daugherty as the elder Webbs. (The two women are particularly adept at miming household activities.) A bevy of supporting players bring the townsfolk into sharp relief, notably Simon Stimson, played with quiet intensity by Mark H. Dold.

Jordan Coughtry and Nisi Sturgis look older than the mid-teen George and Emily. So what. (I’ve seen three good Juliets in the past few weeks, not one of whom could pass for thirteen.) Coughtry is fine as the gangly fellow who learns early in life that no matter how much a fellow thinks he knows, his girl knows more.  And as Wilder’s bottomless vessel of intuition, Sturgis is a treasure. There’s not a trace of pretension in the character or in Sturgis’s unaffected playing. Her Emily is girlish but not giddy and smart but not show-offy. And while Sturgis is way to the north of “pretty enough for all normal purposes,” she delivers on every teen girl’s appearance insecurity. “The best Emily I ever saw,” said my companion. Same here.

I didn’t actually see all of act three clearly, but another viewing wouldn’t help. No doubt my vision would be clouded again by fresh tears. Near the end, Emily asks the stage manager “Do any human beings ever realize life while they live it…?” “No,” he replies. Then, after a pause: “The saints and poets maybe.” To that I would add…and Thornton Wilder.