Screen to Stage: “Honeymoon in Vegas”

If the new musical Honeymoon in Vegas, premiering at Paper Mill Playhouse, doesn’t please everybody, it’s not Rob McClure’s fault. The limber, rubbery-faced song-and-dance man does it all as woeful Jack Singer, still bound, ten years after his mother’s death, by her request never to marry. Nor can you blame Tony Danza, type-cast as Tommy Korman, a suave casino operator-cum-gangster pining over his ex, who died of skin cancer after exposure to the Las Vegas sun. (“Out of the Sun,” he croons to her memory.)

The music and lyrics by Jason Robert Brown (The Last Five Years) are also more than serviceable, with a few numbers, like the opening “I Love Betsy,” providing ear-pleasing fuel for McClure’s boundless energy. 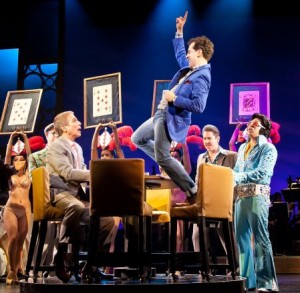 Tony Danza at the piano and Rob McClure in the air

If not any of those elements, what then? Well, it just might be the basic premise, which has Jack losing $60,000 to Tommy in a rigged poker game and accepting Tommy’s offer to cancel the debt in return for a weekend with Jack’s five-year fiancée Betsy (Brynn O’Malley), who reminds Tommy of his late ex. It doesn’t become as sordid as it sounds, even after Betsy inexplicably agrees to the arrangement, but still.

Apparently, the 1992 Nicolas Cage/James Caan/Sarah Jessica Parker movie, from which the show is adapted, was a side-splitter. But as chaste as the Weekend-With-Tommy turns out to be, there’s an ick factor to the barter deal. Andrew Bergman’s book – he also wrote and directed the movie – limits the Betsy-Tommy intimacy to one impulsive kiss and a quickie twerk (!), but shouldn’t the “take my fiancée…please” theme been retired over the past 20 years?

On the plus side, there are some musical comedy pleasures. For one, the brassy show band is visible on stage throughout. They’re as much a treat to watch as to hear. David Josefsberg’s singing MC is a spot-on throwback to Vegas lounge shows, McClure’s antics reinforce the star-quality he exhibited last season as Broadway’s Chaplin, and Denis Jones’s choreography is out of the “blind ‘em with footwork” playbook.

About the time you’re thinking Tony Danza is just along for the ride, his solo turn comes up. His smooth vocal and deft soft-shoe on “A Little Luck” recalls a venerable show-biz tradition, and Danza proves to be a smooth keeper of the flame. 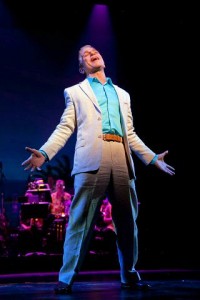 Not-so-plus is a boisterous quartet of flying Elvises, who make the idea of a coach seat on United seem luxurious, or learning that “Friki-Friki” is a cutesy euphemism for doing it.

It’s been suggested that Honeymoon in Vegas is a good date-play. Maybe so, but, guys, don’t run up any gambling debts before you take your girl.

P.S. When the Danza character tries to buy a gun before boarding a plane, he’s told “We don’t sell guns at the airport anymore.”  At least that’s up to date.