Caught in the “middlemen” at NJ Rep

Once in a while, I’d rather pass on writing about a play I’d intended to review. Sometimes because it’s really bad, which has precluded some reviews, and sometimes because the play makes so little sense that offering an opinion would be an exercise in futility. New Jersey Repertory Company’s “middlemen,” with that pretentious lower case ‘m,’ is the latter, but I’ll take a stab at it.

Even describing David Jenkins’s “middlemen” is a challenge. Set in a shiny labyrinth of office cubicles, some with doors and some just open passages, two men are charged with compiling an un-named company’s Annual Report. Before getting to work, there’s quite a to-do about the lack of milk for the coffee. Stanley (Duncan M. Rogers) goes off on non-dairy creamer (“a blend of horse bones and the bad dreams of children,” the play’s best line) and then decries the watery skim milk co-worker Michael (David Friedlander) manages to procure. 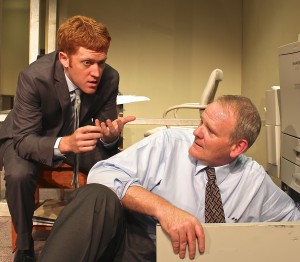 The milk crisis is the first digression in what I’m guessing is supposed to be a commentary on the decline of accountability on the part of an ever-decreasing work force in corporate America – hardly breaking news.

Among other topics tossed into the mix are a family photo left by a departed co-worker that includes his “retarded” son, and Stanley’s fractious relationship with his own young son who expresses himself by smearing his, um, stuff, on the bathroom walls. The inept men go into paroxysms of hysteria when the copier malfunctions, and there’s an ongoing debate over whether or not the men’s financial chicanery was responsible for the bankruptcy of Bolivia, which I’d always thought was Butch and Sundance’s fault.

There’s more extraneous gobbledygook, but halfway into “middlemen”’s 90 minutes my attention flagged. I was re-engaged a few times by the actors’ irrational outbursts, but considering the material, commenting on their performances or on Marc Geller’s direction would be like drawing on un-armed men.