In the words of a Phoenix Productions insider, Irving Berlin’s White Christmas (its official title) is “the kind of show you rush through the book to get to the music.” Agreed. Berlin’s music and lyrics make the show palatable…and then some. Adapted from the 1954 movie about two old Army buddies putting on a show to save their former Commanding General’s Vermont Inn, the dialogue, even re-worked by David Ives (“All in the Timing”), is sappier now than it was then.

But with such as “Sisters” and “Count Your Blessings (Instead of Sheep)” retained, and Berlin’s “Blue Skies,” “Let Yourself Go” and others shoe-horned in, the show is a sure-fire audience pleaser.

When the two guys team up with a sister act, it turns out that one of each pair is a singer and one a dancer. (What luck!) As the singing couple, Jennifer Grasso and Michael Morch put lilt into the “Love and the Weather” duet and each goes nostalgic with “Love You Didn’t Do Right by Me,” sung by Grasso, and Morch’s “How Deep Is the Ocean.” (Morch’s tendency to flat some tones disappears in duets and group numbers.) 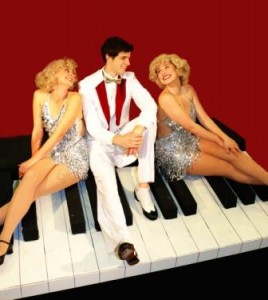 Some guys have all the luck: Ian Brown-Gorrell in “White Christmas”

As the dancing couple, Laura Gepford and Ian Brown-Gorrell tap up and down outsized piano keys on “I Love a Piano” and make “The Best Things Happen While You’re Dancing” true to its title. Choreographer Drew Wilfrid’s claim to sainthood is bolstered by the terrific execution of his fancy steps by an attractive assembly of backup performers, some still in high school.

The temptation to over-act one-dimensional characters, and for director Anthony Greco to allow it, is understandable. To that end, Brianna Rosado and Melissa Javorek’s stereotypical ditzy showgirls are a guilty pleasure. (“Pardon my innuendo, but who is she?” one of them squeaks.) Casey Okamoto camps it up as a harried stage manager, and Nicole Picinic goes hyper as the Inn’s “concierge.” Picinic does a neat “Let Me Sing and I’m Happy” vaudeville turn and joins Grasso and Gepford on “Falling Out of Love Can be Fun,” a little-known Berlin tune that the three gals ace.

Paul Caliendo is four-star as the retired General, although you could drive a tank through his pauses, and Jeff Dworkin is amusing as the sluggish handy-man. As the General’s precocious granddaughter, Sarah Coleman does a spunky “Let Me Sing” reprise. (Sarah Rappoport alternates in the role.)

Check out “White Christmas” for its Irving Berlin tune fest, including a delicious sing-along to the title song. Just try to overlook the limp plot, although it may be your last opportunity to hear someone actually say “hubba-hubba.”