WHICH OLD WITCH? NOT A WICKED WITCH

It’s not quite Halloween and the spooky house on the New Jersey Repertory Company stage isn’t made of gingerbread, but the old crone who lives there is right out of Hansel and Gretel’s worst fears. You can just hear her cackling “Come in to my parlor, children,” and picture her maneuvering the kids into her oven. 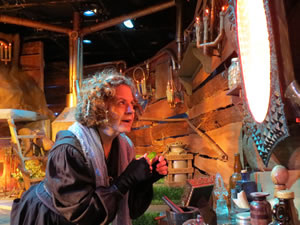 But looks can be deceiving. The woman who flies in this Broomstick, while creepy in appearance and demeanor, and identified simply as Witch, wouldn’t harm a fly. At least not a child. She’s cranky, alright, but hardly evil. As she takes pains to point out, that was a suckling pig in her oven, and not, as neighborhood rumor had it, a little boy.

The Witch in John Biguenet’s offbeat new play is an intriguing concoction of fantasy and reality, leavened with a pinch of irony. She’s also a triumph for Andrea Gallo, who proves once again that one can be enough. Witch, you see, is the only character in Broomstick, and Gallo the only actor. Flying solo two years ago in Donna Orbits the Moon (not on a broom), she held the audience in the palm of her hand, and while the hand is now gnarly, she does so again. 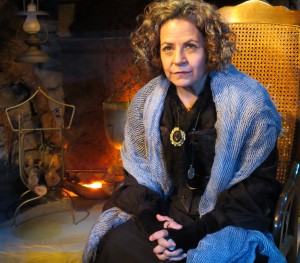 Acting is more than memorization, of course, but a one-character play presents unique problems. The actor must not only remember what the heck to say next, but also needs to project the variety and intensity usually inspired by exchanges with others. Making effective and intimate use of the device whereby Witch is talking directly to the audience, Ms. Gallo accomplishes just that.

It’s an engrossing 80 minutes. Enough tales are conjured up to keep you interested in Witch’s story, which includes witnessing her father’s act of extreme violence and the mysterious down-the-well drowning death of a young woman whose back-story would make a whole other play.

And did I mention: Broomstick is written in verse. So smoothly does Ms. Gallo glide through Mr. Biguenet’s cleverly iambic meter (one unstressed syllable…one stressed…repeat) that it was a good ten minutes before I realized it was verse. Hearing “wrist” rhymed with “kissed” cinched it.

Director SuzAnne Barabas has ensured that Broomstick is not a straight-on lecture. She keeps Witch in motion around and about her familiar surroundings. Jessica Parks’s finely detailed set design and décor pieces, some of which come alive on their own, are classically eerie. If this misunderstood Witch moved out, a truly wicked Witch could move right in without installing even a new cobweb. You may want to pay a visit before the For Sale sign goes up.