“On Borrowed Time” is worth your time…

Reading On Borrowed Time left me feeling that the play creaks, that this representative of the “golden age of the American theatre” is, after 75 years, more than a little stale. Could Two River Theater pull it off, I wondered? More to the point, why even try?

Well, they pulled it off – and then some. Paul Osborn’s 1938 play still creaks, but the production does not. It’s as if we’re experiencing the original, but with a subtly modernized acting style and a sly wink at the dated plot and relationships, factors likely attributable to generations-spanning direction by Joel Grey.

“This is the wildest absurdity I ever heard,” says a character in the second act. And yes, the story leaps the bounds of fantasy into, well, absurdity. But don’t analyze it too deeply, and you’ll come away cheerfully entertained.

When nine-year old Pud, who idolizes his Gramps, is orphaned (by a casually mentioned auto accident), a custody battle ensues between strait-laced Aunt Demetria and Gramps, whose salty expletives have entered Pud’s vocabulary as well.

Enter Death, in the physical form of Mr. Brink, who has come to claim Gramps, but who settles for Granny before being chased up a tree. It seems he cannot descend until permitted by Gramps, who has been granted that power for doing a good deed. 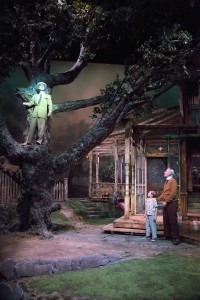 With Mr. Brink treed, the act of dying is suspended world-wide. Rejecting Gramps’s arboreal explanation, Demetria, who cannot see or hear Mr. Brink, tries to have Gramps committed to the State Insane Asylum. (That’s a place-name you haven’t heard for a while.)

After considerable by-play, much of it amusing, the play ends under an oddly unsettling circumstance.

Director – and theatrical legend – Grey’s contribution is obvious, which is not to say that it is intrusive or that it overshadows the performances of his uniformly excellent cast. Not at all. But one cannot imagine these actors, whose ages range from eight-to-eighty, finding the commonality that marks the production without a sure and knowing hand at the helm.

The eight-year-old, Oakes Fegley, is as natural and unaffected a kid-actor as I’ve seen. His Pud tosses off ‘damn’ and ‘hell’ without a hint of relish, and his ease in expressing Pud’s love for Gramps is completely unself-conscious. The senior member of the cast, Robert Hogan, makes it look easy. Little of Gramps is revealed besides his fondness for and identification with Pud, but Hogan fills in the gaps. His performance, at once understated and commanding, anchors the play.

Tom Nelis’s ashy-faced Mr. Brink is neither eerie nor malevolent; he’s just a guy doing his job, although that definition is stretched at the end. Angela Reed humanizes Demetria, the play’s wicked witch, and Diane Kagan is a properly fussy and addled Granny. Betsy Hogg acts Marcia, Granny and Gramps’s caregiver, with grace and restraint until the character becomes an unlikely hero, at which point Betsy’s Marcy glows.

While scenic designer Michael Carnahan’s sturdy climbing tree that dominates half the stage is indeed impressive, Gramps’s homey parlor that occupies the other half is equally so, and Jennifer Tipton’s lighting shifts attention between them effectively.

The 2013-14 season is Two River Theater Company’s 20th. Each of the nearly-100 plays over the years has stood on its own, separate from the progenitor but impossible without it. Besides its cultural (and economic) impact on our area through a vibrant program of entertainment and educational events, Two River Theater Company has put Red Bank on the theatrical map nationally.

Heaping praise on founding producers Robert and Joan Rechnitz is by now redundant. Expressing gratitude will never be. Thank you, Bob and Joan.