The woman who performs 25 songs in Lady Day, the off-Broadway portrait of legendary jazz and blues singer Billie Holiday, is a terrific singer and, within those songs, a consummate actress, producing gushers of emotion in any given sixteen bars.

The woman who plays Holiday in the scripted portions of Lady Day is less impressive, but it’s not her fault. Author Stephen Stahl, who also directed, has compiled anecdotes from Billie’s past in a simplistic form that invites stilted delivery.

Both of the above women are in the person of Dee Dee Bridgewater, and discussing further anything other than the musical treats of Lady Day would be a disservice to jazz-singer extraordinaire Bridgewater and to her uncanny ability to honor the formidable legacy of Lady Day.  To those who read Billie Holiday’s autobiography Lady Sings the Blues, or saw the soapy movie, her history of abuses and addictions is old news, and nothing in Lady Day sheds any new light. 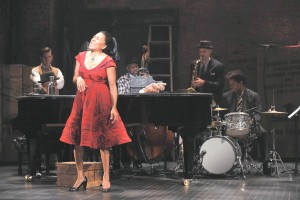 But oh, the music. Every note and every lyric Ms. Bridgewater sings recalls Billie’s vocal style, an incarnation she achieves without resorting to imitation. Dee Dee evokes Billie from within; one senses, in fact, that the two singers are linked in a mysterious and deeply personal way. (At my performance, a casual, in-character ad lib to an audience member could have been tossed off by either one of them.)

The first act of Lady Day is set as a rehearsal for a concert appearance in London, where Billie was exiled after losing her NYC ‘cabaret card’ for drug offenses. She’s late for rehearsal, which serves the purpose of introducing us to her smashing back-up quartet: music director and pianist Bill Jolly, bassist James Cammack, Neil Johnson on sax, and drummer Jerome Jennings, whose engaging presence enhances his spectacular stick work.

Billie shows up, wet from a rainfall, but in full voice, despite grappling with her personal demons. The songs that she rehearses, and the ones she sings in the upscale concert setting of act two, include “Them There Eyes,” “My Man,” the Gershwins’ “A Foggy Day” (it is London, after all) and her own “Lady Sings the Blues.” 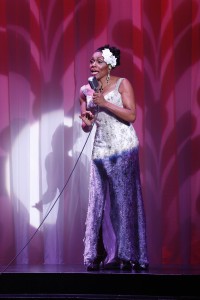 Ms. Bridgewater captures Lady Day’s anguish with “Strange Fruit” and the spiritual tone of “God Bless the Child.” She also pulls off Holiday’s signature alternating syncopation, singing first ahead of and then behind the beat in a swinging “All of Me.”

To paraphrase Yogi Berra, ninety percent of Lady Day is Dee Dee Bridgewater’s superb rendering of the Billy Holiday songbook; the other half doesn’t matter.