Following his .301 batting average finish with the Colorado Rockies in 2012, Redan High School graduate Chris Nelson had a busy off-season, working on his hitting technique with a batting instructor, setting nutritional goals with the help of a Registered Dietitian and, oh yes, becoming engaged to his girlfriend of several years.

Having been drafted #1 by the Rockies out of Redan in 2004, Nelson, a Decatur native, made his way through Rookie, Low-A, High-A, Double-A and Triple-A leagues to find himself now the starting third-baseman on the Major League club.

In the cage: Spring training BP

The third-base job is a sign not only of Nelson’s skills at the position, but also of his versatility. After all, his selection as Louisville Slugger’s 2004 High School Player of the Year for the state of Georgia was as a shortstop! That position on the Rockies is all-star Troy Tulowitzki’s, but team management was confident that Nelson, a canny base-runner as well as accomplished hitter and fielder, could master another infield position. (All you need to know about his speed on the bases is that in 2010 he accomplished the first-ever “straight steal” of home in Rockies history.)

The team’s confidence paid off when, in 2011, Chris split his playing time evenly between second and third base, with a couple of games at shortstop as well. By 2012 he was settled at third, appearing in 111 games at the position and finishing with that lofty .301 batting average. During spring training this year he was named the Rockies opening-day starting third baseman.

Long toss across the diamond

Nelson credits his batting instructor with schooling him in making contact with a wider variety of pitches, coaching that has paid off in his ability to hit to all fields. He also cites his nutritionist consultant with tailoring a diet that maximizes his endurance and overall physical condition.

As comfortable as Chris has become on the baseball diamond, the diamond ring he presented to his fiancée is an equally satisfying accomplishment. He and Brittany Freeman became engaged while on vacation in the Bahamas last fall. He surprised Brittany with the proposal, but the chivalrous young man had informed both his and Brittany’s mother in advance, pledging them to secrecy. “I couldn’t even tell my own mother,” Chris’s mom said. “Thank goodness he also told Brittany’s mom so I had someone to talk with about it.” (The two women have become close; Brittany’s mother visited in Decatur last November.)

Chris and Brittany, both 27, met in 2010 when she came from her home in Macon to a birthday party in Stone Mountain for her roommate at Savannah State College, where she had majored in Political Science. Since then, Ms. Freeman has become not just a cheerleader for her future husband, but a knowledgeable baseball fan as well. The couple is planning a December wedding at the Four Seasons in Atlanta. 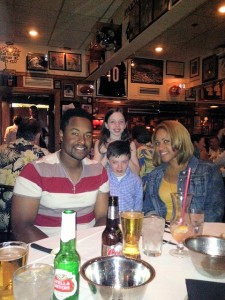