“Lucky Guy” is played by the right guy…

When I’m seated in a theater before the show starts, I show my cell phone to my companion to verify that it is indeed turned off. Call me paranoid, but even when I’m alone I enlist the services of whoever is seated next to me. A phone might ring, but it damn sure won’t be mine!

I thought I was the only one who did that, but on December 11, 2002 (I know I’m not the only ticket-stub saver), I was with my daughter-in-law at the Booth Theatre waiting for the start of Our Town*, when a man, obviously alone, took the seat next to her. He fussed with his phone for a bit, then turned to her and asked her to confirm that his phone was off. She did so, glancing at him with a startled “Oh! Hello!” whereupon the man extended his hand and introduced himself. “Hello,” he said. “My name is Tom.” 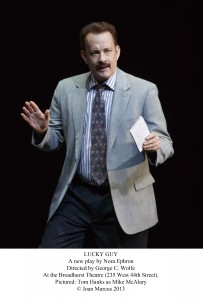 Last week dtr-in-law and I were once again in a theater with Tom Hanks, this time to see him portray the late, iconic New York newsman Mike McAlary in Nora Ephron’s bio-play Lucky Guy.

Hanks’s Broadway appearance, his first, is as much a tribute to the playwright as her play is to McAlary.  Ephron, who died last year, wrote the screenplays and directed “Sleepless in Seattle” and “You’ve Got Mail,” two Hanks (and Meg Ryan) hit films. If her play doesn’t reach the level of those two movies, Hank’s performance kicks it up a couple of notches.

On a scale of one-to-ten I give Lucky Guy a six. Set in sundry NYC locations (on a relatively bare stage), including the newsrooms of the Daily News and the Post, papers for which McAlary wrote between 1985 and 1998, the year he died on Christmas day at age 41, it’s less of a play than it is a McAlary highlight reel.  That said, Hanks rates a solid eight in the role, and compared to most of the Hollywood celebs that have graced Broadway stages in the recent past, he’s nudging a ten.

This is a story about guys, and besides the potty-mouth distaff reporter (Deirdre Lovejoy, relishing every f-bomb) and Mike’s blandly sympathetic wife (Maura Tierney), it is indeed the guys of the NYC environs who flesh out the McAlary scrapbook. Among those guys, Courtney B. Vance and Peter Gerety are outstanding as the newsroom’s high-profile African-American and the token wiseacre, respectively. 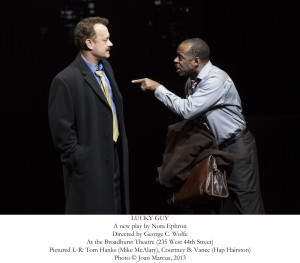 Tom Hanks and Courtney B. Vance

Nine other ‘guys’ are, with one striking exception, noted below, along for atmosphere, which leaves Tom Hanks to do the heavy lifting. The actor who found Private Ryan against all odds and who was stranded on a remote island with Wilson the Volleyball for company fleshes out McAlary in all his grit and know-it-all style.

Disciplined for his hasty and wrong-headed dismissal of a Brooklyn rape victim as a phony in 1996, McAlary won a Pulitzer Prize for his coverage of the New York police torture of Abner Louima in the same Borough the following year. McAlary’s reportage of the incident has become a journalism-class teaching module. The depiction of it is certainly the apex of this play.

Reportedly, McAlary, who had been diagnosed with advanced colon cancer, got the Louima tip while he was undergoing chemotherapy. The play has it so, and the scene where he breaks off treatment to interview Louima in the hospital are as harrowing – and well acted – as any on Broadway. Stephen Tyrone Williams, making his Broadway debut as Louima, is a lesson in quiet intensity as he relates the details of the torturous maltreatment in the station house rest room. Hanks is no less effective, sitting in silence at the bedside and just…listening.

As noted, the play is no award-winner, but as a quick-scan of tabloid journalism in the Big Apple before it was Disney-fied – and for the opportunity to be in the same room with Tom Hanks and his full-out, un-self conscious performance, Lucky Guy emerges as an altogether worthwhile chunk of Theatre.

* Tom Hanks was there to see Paul Newman, who played the Stage Manager. The two had recently co-starred in the movie “Road to Perdition,” which was Newman’s last screen appearance. He died in 2008.