All hands on truck! (“Hardbody,” that is)

It hardly seems fair. Despite being on stage every minute, the title character of Hands on a Hardbody doesn’t get a curtain call. In fact, she (I’m going with ‘she’) is ushered off into the wings before the rest of the cast takes their bows.

The red, brand-spanking-new Nissan ‘hardbody’ pickup truck really does command the show. Center stage throughout, she rolls upstage and down and circles in place, either in support of a dozen flesh-and-blood actors…or vice versa.

The concept of Hardbody, adapted from the 1997 documentary film, has ten contestants standing in a Nissan dealer’s lot in Longview, Texas, with one hand (gloved, so as not to mar the gleaming red finish) on the truck for an indeterminate amount of time until one-by-one they give up, pass out or otherwise lose manual contact. Not allowed to sit or even lean, they get a 15-minute break every six hours (the porta-potty line is long), and the last one in contact wins the red machine. 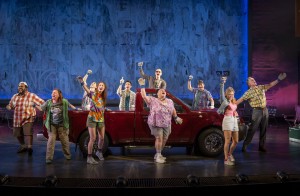 In formula fashion, the contestants cover all the bases: there’s the good-ol’ boy who won the previous year’s truck, only to have his wife take off in it with another man; a rotund woman who’s depending on the prayers of co-believers; a sexy blonde who’s not unwilling to improve her chances by cuddling with the dealership boss; an innocent young couple whose discovery of one-another is, well, touching; and an older fellow, played by Keith Carradine, whose disabling oil-rig accident had cost him his job.

Rounding out the would-be truckers are a stoic ex-Marine with PTSD issues, a Texas-born Hispanic who bristles at being stereotyped, a caustic-tongued older woman and the requisite African-American who talks in jive. The car dealer and his tart office manager add some financial intrigue, and a radio emcee and two contestants’ spouses contribute to the Texas ambiance.

Do you like country music? I don’t…until I’m listening to it. The first-rate score here, by Phish-founder Trey Anastasio and Amanda Green (music) and Ms. Green (lyrics), runs the gamut from country-soulful to gospel-giddyup, and the eight-musician, thirteen-instrument band, under conductor Carmel Dean, is stuff-kickin’ good. And considering no scenery, Sergio Trujillo’s “musical staging” and Neil Pepe’s direction keep boredom at bay. Everyone, including our gal Nissan, is in motion.

The show is performed in two acts, but it unfolds in more like four quarters. The first half of act one is the setup, where you meet the contestants and learn the contest rules; the ‘second quarter’ fleshes out the characters and features a rousing gospel number, inspired by the religious woman’s gradually-evolving laughing fit, enacted brilliantly by Keala Settle. The first half of act two is about who is weakening and why, and the final quarter ends with [name redacted by spoiler-alert police] winning the truck.

A great show? Nah. But one with engaging characters and a ‘who-wins-it’ guessing-game that keeps you interested to the end.