“Ants” are people too, you know…

The February 17, 2013 entry on The Beer Calendar (courtesy of William Raser):

Sir John Lubbock, a noted nineteenth-century biologist who studied ants, bees and wasps, did an experiment during which he got a large number of ants drunk.  He discovered that those ants that remained sober would carry their drunken friends back to the nest – but only if they were from the same colony.

Somewhere in a colony of wee-little ants – perhaps the one in the sidewalk crack outside your door – there’s an Ant Colony Repertory Company putting on a play called “People.” In that play, a male/female pair of worker-ant scientists are studying humans, whose division of labor and communication between individuals are strikingly similar to theirs. Imagine also that the play was written by an ant from a distant sidewalk crack, and that the ant-actors speak in a foreign-ant accent.

A third ant, the female scientist’s sister and roommate, has lost her job (lugging twigs ten times her weight), and the crawly siblings are concerned about where their next bread crumb is coming from.  As if that weren’t enough to make anyone antsy, sis is heavy with antlet and will not reveal the daddy’s genus.

The goal of the ant scientists is to alter the social structure and reproductive habits of their human research subjects, and gradually, the parallels between the ants and their subjects begin to merge until one ant actually takes on some characteristics of the human specimen she’s been studying.

Also, there’s an anthill of hanky-panky going on between the male ant and the two females; just like the humans they’re studying, these ants can’t keep their feelers under control.  (Thus the saying “ants in your pants.”)

You cannot see this ant play, but reverse the roles above and you have “Ants,” a new play by Saviana Stanescu, running through March 10 at New Jersey Repertory Company in Long Branch New Jersey.  In that play, a male/female pair of human scientists are studying ants, whose division of labor and communication between individuals are strikingly similar to theirs.

A third human, the female scientist’s sister and roommate, has lost her job (on a boring assembly line) and the siblings are wondering where their next rent payment is coming from.  As if that weren’t enough to make anyone, um, antsy, sis is heavy with child and will not reveal the father’s identity.

The goal of the human scientists is to alter the social structure and reproductive habits of their ant research subjects, and gradually, the parallels between the people and their subjects begin to merge until one scientist actually takes on some characteristics of the queenly ant she’s been studying. And of course there’s hanky-panky in this one too.

The illustration is admittedly labored, but “Ants” really does focus on the similarities between ant and human behaviors. It’s a potentially amusing idea, but as written by Ms. Stanescu and directed by Jeff Zinn, it’s a heavy-handed enterprise, ameliorated somewhat by the intrepid actors, who tackle the material gamely.

Presented in a series of a dozen or so scenes, the play makes forays into scientific discourse (mini-lectures and an instructional film); soap opera (a tepid bedroom scene); melodrama (an abortion debate); and fairy tale (a happy ending).

As Mia, the distaff member of the research team, Maria Silverman’s energy runneth over; perky as can be, she anchors the play’s token funny scene (Mia seeking her first sexual encounter) and, improbably, a sexy one as well (Mia about to accomplish that goal).

Michael Samuel Kaplan is not typically hunky, but he gets Mia’s mentor and lab partner’s maleness across, sometimes crudely (character, not actor) and once to good effect (that kissy scene).  NJ Rep veteran Carol Todd acquits herself well in the borderline-thankless role of the sister.  Playwrights who need an actor to play unemployed, broke, restless, adulterous, pregnant, abortion-considering and occasionally foul-mouthed could do a lot worse than to call on Ms. Todd. 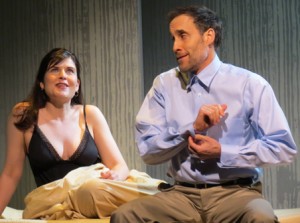 The Romanian-born playwright posits the sisters as émigrés from Eastern Europe, which prompts the actors to speak in what to my ear is a generic Slavic accent, although the play is set in “a small American town…maybe Connecticut.”  The accents don’t add anything, nor do they detract.  Reasonably consistent, they just sound, well, foreign.

If there’s a message to be taken from “Ants,” it’s couched in the expressed idea that if a worker ant is treated like a queen, she’ll take on queenly attributes.  Substitute ‘woman’ for ‘ant’ (or ‘man’ and ‘king,’ for that matter) and the parallel is drawn.  That’s what “Ants” is about.  I think.

P.S. In his customary pre-show speech, producer Gabor Barabas spoke elegantly of his own family’s escape from Hungary during that country’s 1956 uprising and the odyssey that eventually landed him, with his wife SuzAnne, at the helm of a theater company in New Jersey.  “I hope the play is as good as your speech,” I whispered to him as he made his exit up the aisle.  Let’s just say that Gabe is a hard act to follow.