Attractive Opposites: “Two Trains Running” at Two River and “Lend Me a Tenor” at Paper Mill

“Two Trains Running” and “Lend Me a Tenor” are genres apart, but both plays are being fulfilled at their respective New Jersey Regional theaters.

“Two Trains Running,” at Two River Theater in Red Bank, New Jersey, is the 1960s representative of August Wilson’s ten-play cycle that illustrates African-American ‘issues’ during each of the 20th Century’s decades.  Set in Pittsburgh’s Hill District, as are all the plays, “Two Trains” is a follow-up to last year’s Two River production of Wilson’s “Jitney,” both directed by Ruben Santiago-Hudson, lately recognized as a go-to interpreter of Wilson’s work.  (Both plays extremely well-acted also, with a few repeat cast members.)

“Two Trains” is different from “Jitney,” which has a clearly defined linear story; “Trains” is loosely plotted, more about mood than events. As such, and featuring long philosophical reminiscences, it is less accessible.  It is 15 minutes shorter here than the Broadway three hours, a pace that’s welcome even as it challenges clarity.

Besides the owner (Chuck Cooper), the regulars at Memphis Lee’s restaurant include resident philosopher Holloway (James A. Williams), a numbers runner (John Earl Jenks) and a prosperous undertaker (Harvey Blanks) who may or may not bury local Prophet Samuel with his jewelry intact.

Members of the cast of "Two Trains Running"

There’s also waitress Risa (Roslyn Ruff), whose self-inflicted cuts and over-emphasized lethargy stand in for her emotional scars, and Hambone (Anthony Chisholm), a mentally challenged old-timer still obsessing (“I want my ham!”) over being stiffed on a long-ago fence-painting job. Finally, dashing newcomer Sterling (Owiso Odera) shows up, fresh from a stint in the penitentiary.

Questions asked and answered as the play probes the psyches of these fascinating characters include: Will the property-condemning city of Pittsburgh meet Memphis’s asking price? (The answer’s a surprise.) Will Risa accompany Sterling to the Malcolm X memorial rally?  (Maybe yes, maybe no; but their dance to the juke box is as tender an interlude as you’ll ever see.)  Do Holloway’s philosophical musings solve any problems? (Maybe not, but his muse, 322-year old Aunt Ester, has his back.) And far from least important, does Hambone get his just wage? (A spirit-lifting resolution.) 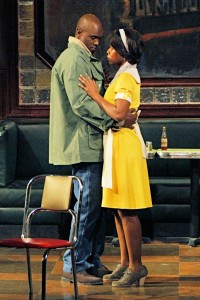 These and other issues are variously considered and resolved in August Wilson’s distinctive language, which, to a degree unmatched by any other modern American playwright, is simultaneously prosaic and poetic. How did the man do that!

‘Tis the silly season at Paper Mill Playhouse, thanks to an inspired production of Ken Ludwig’s “Lend Me a Tenor.”  If all the actors who have appeared in Community Theater productions of the play are lured in, Paper Mill should have no problem filling the house.

Depending upon the ‘farceability’ (my word) of its personnel, “Lend Me a Tenor” can be very funny.  It is an expertly-constructed farce, with the requisite first-act setup, second-act payoff and multiple doorways.  Paper Mill director Don Stephenson and a comically gifted cast mine the play’s broad tomfoolery.

The play is set in 1934. The Cleveland Opera Company has engaged famed Italian tenor (and notorious ladies’ man) Tito Merelli to sing Verdi’s Otello. Through a series of comically engineered misunderstandings, Tito is presumed dead at the end of the first act and the fiancé of the opera producer’s daughter is pressed into service to impersonate the star and sing the role. Act two is structured around the two Otello tenors being mistaken for one another.  The resultant mayhem involves those two and others popping in and out of all those doors, including the addled opera company producer and a couple of comely young women in various states of undress. (Yup, farce.) 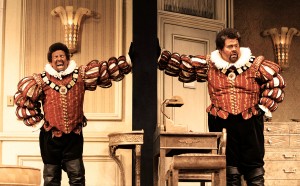 As the real Tito and stand-in Max, John Treacy Egan and David Josefsberg are a simpatico odd couple.  Josefsberg is a particularly agile comic actor with energy to spare, and his slight stature belies the resonant tenor that resides within.  Tito’s would-be Desdemona (Donna English) and Max’s fiancée (Jill Paice) are both alluring seductresses, and Judy Blazer is fiery as Tito’s justifiably jealous wife. As the local impresario, Michael Kostroff turns middle-aged buffoonery into a veritable class in physical comic shtick.

I’ve seen the Othello confusion between the two white characters staged with and without skin-darkening makeup.  Either way, the gimmick tests one’s suspension of disbelief, and a plain-face community theater production in Spring Lake was a real stretch, but they got their laughs.  At the other extreme, coal-black minstrel-show makeup at a professional regional NJ theater, which will remain un-named, was, to me, patently offensive. (Adding insult to injury, the makeup obscured all of the actors’ facial expressions.)

Paper Mill’s solution is ideal.  Both actors’ faces are shaded just enough to make the point…to ease the strain of disbelief without turning the concept into a cartoon.  Good for them.  And good for you if you catch the show; it’s really, really funny.

Through March 10 at Paper Mill Playhouse, Millburn NJ.  Performances Wednesday-Sunday. For schedule/tickets: 973-376-4343 or online at www.papermill.org