Over 25 years of commenting on Community Theatre, I have come to admire companies that select difficult/obscure/ rarely produced shows and the people who commit themselves to them.  “You’re not playing it safe,” I said to a Phoenix Productions board member before opening night of Ragtime last November.  “You don’t come to the easy ones,” he replied.  And so it is that I may have seen my last Dreamcoat…at least until my granddaughter appears in a high school production.

Among recent straight plays that stick in memory are God of Carnage at First Avenue and both Inherit the Wind and Our Town at Holmdel. (Don’t scoff; it was David Cromer’s re-imagined Our Town, and Holmdel aced it.)

The last few years have spawned a wave of Stephen Sondheim musicals.  I say ‘last few years,’ although Spring Lake did A Little Night Music in 1996.  (And Company in ’98.)  Several stagings of Sweeney Todd and Assassins popped up in 2011 and ’12.  None of these shows is a walk in the park (Anyone doing Sunday in the Park?), but the ones I saw, Sweeney Todd at Phoenix and Assassins at Edison Valley were admirable in effort and result.

So is Main Street Theatre’s Company, playing through February 16 in Parlin NJ.  Sondheim’s most light-hearted show (excepting Forum, of course) nonetheless makes good points about marriage, loneliness and all manner of relationships.  Groundbreaking in 1970 for its non-linear form, it’s still a challenge on both sides of the footlights. 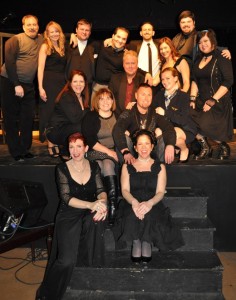 The cast of "Company" at Main Street Theatre Company

On his 35th birthday, NYC bachelor Bobby interacts with five married couples and three girlfriends in unconnected vignettes.  The couples and girlfriends represent different social values and relationships.  Each has a devoted scene and all the actors except Bobby also double as anonymous back-up singers. It’s a fascinating construction.

In intriguing melody and smart rhyme, Sondheim’s score is superb, delineating the characters musically.  George Furth’s book is less compelling, and in most productions, this one included, we more-or-less bide our time between songs.

At Main Street, the waits are worth it.  Thanks to the superior musical direction of Bruce de la Cruz, his excellent eight-piece orchestra and the cast’s uniformly fine vocal talents, this Company is musically sound (forgive the pun).

The beginning, a seemingly endless choral stream of “Bobby!” and “Bobby Baby!,” sets a high standard for precision that is upheld throughout, and from there it’s one spiffy number after another.

We open with Sarah demonstrating her karate skills on husband Harry (Laura Herr and Patsy Palma find the right blend of comedy and action), while the jaded Joanne (Linda Correll) sings about “The Little Things You Do Together” that make marriage a joy (like humiliate your husband). Ms. Correll later bravely attacks the classic “Ladies Who Lunch” – and darned if she doesn’t conquer it.  Joe Sherbin plays Joanne’s husband with just the right amount of forbearance.

If there’s a catchier number in all of musical theater than “You Could Drive a Person Crazy,” I’ve yet to hear it, and Jessica Alcid, Dawn Gaylardo and Shona Roebuck, as Bobby’s girlfriends, are as delightful a trio as ever vamped their way through it, while Susan Zuckerman’s choreography suits the tune to a tee.  After living together for years, Amy (Ami Martino) and Paul (A. J. Meeker) are getting married, but Amy has the jitters.  “(I’m not) Getting Married Today,” she sings, in a rapid-fire delivery that she masters. Good work, Ami/Amy.

Marital scenes between David (Mark J. Bracken Jr.) and Jenny (Jessica Mennella), who gets silly on weed, and Susan (Susan Zuckerman) and Peter (Mark Schumacher), who divorce and end up happier together, make the point that one must adjust to mal-adjustments.

Bobby is the subject of everyone else’s concerns, and while Matthew Rae could be more magnetic in the role, he sings Bobby’s heartfelt “Marry Me a Little” and the climactic “Being Alive” with authority.

Despite a few untidy moves, director Brian Remo keeps the show on pace. The seduction scene could be steamier and he might have sewn a couple pockets closed.  Also, for reasons unknown, every cast member is clad in black throughout, a misfire in too many ways to detail.

I referenced the orchestra above, but their deployment also deserves mention.  They are cloistered in a room at the back of the audience, where de la Cruz conducts via two-way closed circuit TV.  The collaboration between conductor and singers could not be smoother if the baton was at the lip of the stage.

Company virgins are urged to add Sondheim’s tuneful outing to their theater-going resumes, while Company veterans will be glad they caught it again, especially during the vibrant two-song medley that opens the second act.