Over the years, dozens of plays and musicals have moved from off-Broadway to Broadway.  Best-known is probably A Chorus Line, which clocked more than 6,000 Broadway performances after only 101 downtown. More recent examples include Putnam County Spelling Bee, In the Heights, Spring Awakening, and the current Peter and the Star Catcher, but Avenue Q, celebrating its third off-Broadway anniversary this October, was the first major show to make it a round trip.

Avenue Q ran briefly off-Broadway before moving to the Main Stem in 2003, where it staged a David-Goliath upset, beating out Wicked for the Best Musical Tony Award. (Q was, after all, my “most delightful, innovative Broadway show in years.”) By 2009, six years later, ‘downsizing’ had become a common term, but it hadn’t applied to a Broadway show until Avenue Q packed up and moved from West 45th Street to New World Stages, five blocks north and 300 seats fewer, where it was “every bit as good…maybe better.” It’s still on 50th Street and still delightful, still innovative and still every bit as good. 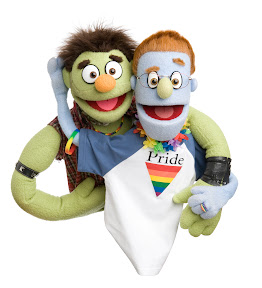 Ricky and Rod (not exactly Bert and Ernie)

For those who might not be familiar with Avenue Q, or who think of it as a puppet show, it is indeed that…and so much more. Inspired by “Sesame Street” and its creator Jim Henson, Q is an R-rated musical whose puppet creatures are similar to Muppets in all aspects except vocabulary, behavior and the visible, interactive presence of their human manipulators. These are not marionettes controlled from above or Punch-and-Judys voiced from behind. In full light and freely expressive, the puppeteers and their charges function as extensions of one another. In a sort of osmosis, the torso figures absorb and pass on the qualities enacted by their hugely talented human partners. Or is the other way ‘round?  Whichever, it is the unique interplay that elevates Avenue Q and makes it so special.

That and the Tony-winning music, lyrics and book that fill two acts over two hours with little down time. The plot about the relationships on Avenue Q is told through a series of vignettes about hang-ups and social values. No platitudes here, though. Consider some of the song titles: “Everyone’s a Little Bit Racist” (even the guy with the ‘Oriental’ wife), “It Sucks to Be Me” (c’mon, you’ve felt that) and “The Internet Is for Porn” (well?) hit their targets.  It’s also good to know that “You Can Be as Loud as the Hell You Want When You’re Making Love,” sung while two puppets are getting it on…realistically…puppets!

If you can’t relate to “There’s a Fine, Fine Line Between Love and a Waste of Time,” you’ve led a pretty dismal life; and while Nicky telling his roommate Rod he’d still like him “If You Were Gay” (he’s closeted) is amusing, that reassurance might have prevented a recent real-life tragedy.

The human handlers are all skilled puppeteers and fine actors with the control and discipline to add full-body emphasis without distraction. Veronica Keuhn manipulates both Kate Monster, whose gentle nature belies her name, and Lucy T. Slut, who lives up to hers. Ms. Keuhn voices them both, sometimes in conversation with each other. (See it and hear it to believe it. Amazing.) 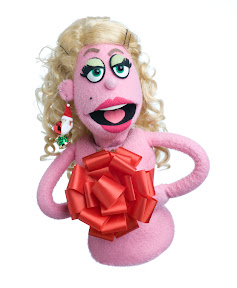 The intimate venue, one of five in the New World complex, is the ideal space for this wonderful show, which hasn’t lost a step in three – nay, nine – years. Even with a stage wide and deep enough for the realistic Avenue Q brownstone duplex with its front stoops and sidewalk, the entire audience is up close and personal. And the small keyboard-centric band is just right for the room. Plus, would you believe, there’s a full intermission bar just beyond the auditorium doors. If you haven’t seen Avenue Q, get yourself to it here. If you have seen it, be assured that it holds up well – better, even – for a second visit.