Batter Up: “Rounding Third” at Holmdel

If you’ve ever been a Little League player, coach or parent, which pretty much covers all the suburban New Jersey bases, you’ll find something to identify with in “Rounding Third.” The engaging two-hander is batting a solid .300 at Holmdel Theatre Company through October 7.

Don (Michael Basile) is an overbearing “winning is everything” coach and Michael (Jim Stanek) is his sensitive “just have fun out there” assistant.  Their respective sons are also opposites; Don’s is the star pitcher and Michael’s is, well, not exactly the second coming of Mickey Mantle. 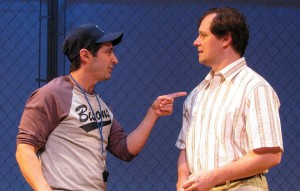 While “Rounding Third” is set against the background of Little League games and practices, it is not about baseball. It’s about two men who have personal problems and typical male reluctance to unburden themselves. Don’s scorn for Michael’s easygoing personality seems to roll off the other man’s back, but as the play develops, both men are revealed to be more than they seem at the start. Richard Dresser’s play spins out the character development naturally and without artifice as the men edge toward compromise and a tentative friendship. 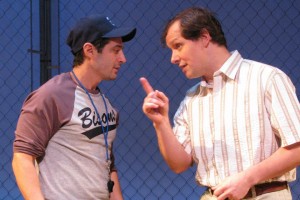 Michael (Stanek) gives it back to Don (Basile)

At nearly two hours in two acts, the play is overlong, but the give-and-take between the two men as crafted by the playwright – and handled by the actors – evokes another sports metaphor: a tennis match. The two actors volley well together, and while Basile nudges Don’s wiseguy-ness too close to caricature in the early going, the contrast is believable and clear, as is the mutually effective comic timing.

The pre-adolescent team members, addressed as if in the audience, become real. They seem to augment the two-man cast, and you care whether they’ll get a hit or, in one especially soulful and well-delivered (by Stanek) speech to the baseball gods, catch a fly ball. Mary Lynn Dobson’s direction is smooth; the spare set (Patty Wall) complements the space, and Courtney Keating’s lighting separates and sets the scenes nicely.

More than any other sport, baseball is held up as a metaphor for life. “If you build it they will come” is not about a ball field.  Here, ‘Will the team win its games?’ translates into ‘Will the men lick their demons?’  Those questions combine to make “Rounding Third” a highly satisfying comedy-drama.

At Holmdel Theatre Company, Crawfords Corner Road, Holmdel, NJ through October 6, with performances Fri and Sat at 8pm. For tickets ($22; seniors $17; students $12): SmartTix at 212-868-4444 or at www.holmdeltheatrecompany.org