Good news: The final production of Pulp Shakespeare that I saw at the New York International Fringe Festival wasn’t. The final performance, that is.

Each year, after the Festival closes, the cream of the nearly 200 shows are selected for further production in The Best of the Festival Encore Series, and Pulp Shakespeare is one of the 15 shows that made the cut. They’ll all be presented in rotating repertory September 7 – 30 at venues in the Village (Pulp schedule below).

The New York Fringe Festival is a collective crap shoot.  Despite the successes of Urinetown and [title of show], both of which went on to Broadway, most Fringe shows fade into obscurity soon after the two-week August run.  This year, 187 shows ran at over a dozen East and West Village venues; I caught three. One was pretty good, one was quite good and one, Pulp Shakespeare, was Outstanding!

Pulp Shakespeare imagines Quentin Tarantino’s classic cult film “Pulp Fiction” as it might have been written by The Bard. Co-written under the banner of Her Majesty’s Secret Service by four writer/actors, one of whom, Jordan Monsell, directed and appears in the cast, it is part take-off, part parody and part homage to the movie. Throw in adaptation, whatever; the 90-minute concoction is a smart brain-tease. It’s way more than the sum of those parts. (In its own quirky way, it’s as faithful to its source as are Disney’s Mary Poppins and Newsies.)

It must be said up front that one’s enjoyment of the play will correspond with the degree of one’s familiarity with the movie, and a passing acquaintance with Shakespeare is a pre-requisite. But trust me, veterans of exposures to both will be knocked out by Pulp Shakespeare. 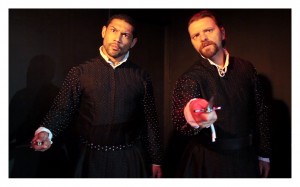 Dan White is a Samuel L. Jackson sound-alike – and think about it: Ezekial 25:17 doesn’t need tampering, up to and including ‘FEURious anger’. Others who capture the original in authentic-sounding iambic pentameter (or some-meter) are Aaron Lyons as Vincent Vega (Travolta); Nathaniel Freeman, in for Ving Rhames as Lord Marcellus; and Christian Levatino, who nails “Sir” Butch (Bruce Willis).

Monsell, whose direction is liberal and firm at the same time, does the Christopher Walken speech with deadpan perfection. (Butch’s dad had secreted the ‘clock’ for two years “where the sun shines not.”) 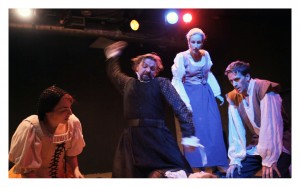 Reviving Lady Mia with a stab to the heart.

Subtle references abound. Mia and Vincent’s waiter as Richard III is one; the accidental slaying of Marvin is another. (“Zed’s dead” is fine as-is.) The guns are daggers and swords, which still works after 400 years, especially when Butch ponders whether “to flee or not to flee” Maynard’s store.

Tarantino’s movie is R-rated, mostly for language and for some violence. Pulp Shakespeare comes in at PG, but it’s not so much sanitized as it is translated into a vernacular that might well have shocked the Elizabethan hoity-toity. Today, it’s an insanely clever blend of Tarantino’s oddly formal tone with the Playwright/Poet’s English language that is not, nor will ever be, dated.  Her Majesty’s Secret Players are reportedly working on Shakespearean versions of both “The Wizard of Oz” and “The Godfather.”  I can’t wait.
PULP SHAKESPEARE
Written by Ben Tallen, Aaron Greer, Brian Watson-Jones & Jordan Monsell, who also directs. Soho Playhouse, 15 Vandam Street, between Varick and Sixth Avenues. Performances: Wed 9/19 at 8PM, Thurs 9/20 at 9PM, Sat 9/22 at 3PM, Mon 9/24 at 8PM & Wed 9/26 at 8PM.