The 2011-12 Antoinette Perry Awards, the coveted Tonys, will be announced on Sunday evening, June 10, live on CBS-TV.  Among televised award shows, the Big Three in terms of viewership would be the Grammys and Oscars in first and second place (or vice versa), followed by the Tonys.  It’s fair to say, however, that the Tony Award ranks first in importance to its particular constituency, the Broadway Theatre.

Songs and movies that aren’t nominated or don’t win Grammys or Oscars are not immediately pulled from iTunes or movie houses, but ignored or defeated Broadway shows often shutter, sometimes within days. Despite being nominated, “Leap of Faith,” which opened to disapproving reviews (I rather liked it), calculated its slim chances for a win and closed in mid-May.

In 2009, critics were ousted from Tony voting (press agents, theatrical union reps and even producers remain among the 750 voters), so we console ourselves with predictions.  In 14 of the highest-profile categories, mine follow:

Best Musical:  Three of the four nominees, “Leap of Faith,” “Newsies” and “Once,” were adapted from movies. The fourth, “Nice Work If You Can Get It,” resurrects a dozen George and Ira Gershwin tunes, making for pleasant listening, but little more. “Once” is the charming story of a disillusioned Dublin street musician and a pixie-ish Czech immigrant who communicate through the music he writes and she plays on the piano. Nominated for eleven Tonys, it’s the likely winner of three or four, including Best Musical. 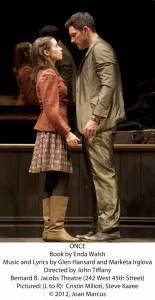 Cristin Milioti and Steve Kazee in "Once"

Best Play:  All four nominees originated off-Broadway, to critical praise.  (Broadway houses are those with 500 or more seats; off-Broadway, 499 or fewer.)  “Peter and the Starcatcher” is an imaginative prequel to “Peter Pan.” The theatrical-themed dramatic comedy “Venus in Fur” is highlighted by the sexually charged performance of Nina Arianda, herself a Best Actress nominee. Neither of those plays has much chance here, and I’m hard pressed to decide between the other two nominees. Jon Robin Baitz’s “Other Desert Cities” embroils two generations of a family in a tension convention, and Bruce Norris’s 2011 Pulitzer-winning “Clybourne Park” is a look back and an up-date on the disposition of the house purchased by the Younger family of “A Raisin in the Sun.”  A tie vote would be ideal, but my prediction is “Clybourne Park.”  (There have been nine ties over Tony’s 66 years, most famously between “The Sound of Music” and “Fiorello” for Best Musical in 1960.)

Musical Revival:  Andrew Lloyd Webber is represented by a wan revival of “Evita” and an overwrought “Jesus Christ Superstar.” Neither will win. “The Gershwin’s Porgy and Bess” and (Stephen Sondheim’s) “Follies” are both stunning, re-imagined takes on classic musicals.  It’s a tossup, but I think “Follies” will win.

Play Revival:  The nominees, all outstanding, are “Gore Vidal’s The Best Man,” “Wit” by Margaret Edson, “Master Class” by Terrence McNally, and “Arthur Miller’s Death of a Salesman.”  “The Best Man” boasts James Earl Jones and Angela Lansbury in its overall strong cast, while “Wit” and “Master Class” were elevated by the bravura performances of Cynthia Nixon and Tyne Daly respectively.  “Salesman” is the only play with two revival Tony Awards already: in 1984 with Dustin Hoffman as Willy Loman and in 1999 with Brian Dennehy.  This year, with Philip Seymour Hoffman, will be its third. (“Salesman” also won for Best Play in 1949.)

Leading Actress in a Play: “End of the Rainbow” is a play, but its music is as integral as that of any Broadway musical of this or recent seasons. Plus, it’s performed by a dynamite on-stage band and an electrifying Tracie Bennett as Judy Garland.  Bennett does not impersonate la Garland; she inhabits the infinitely sad woman during her last concert engagement in London before her death in 1969 at age 47. The other nominees, Nina Arianda (“Venus in Fur”), Stockard Channing (“Other Desert Cities”), Linda Lavin (“The Lyons”) and Cynthia Nixon (“Wit”) are all splendid; but as the New York Times critic put it, Tracie Bennett is sensational, in every sense of the word. 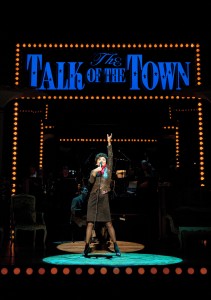 Tracie Bennett as Judy Garland in "End of the Rainbow"

Leading Actor in a Musical: The two leading men from “Follies,” Danny Burstein and Ron Raines, should cancel each other out.  Jeremy Jordan (“Newsies”) and Steve Kazee (“Once”) are both rookies who will get their chances. Broadway veteran Norm Lewis sings and acts Porgy nearly as well as his co-star Audra McDonald does Bess.  He seems like the winner to me.

Leading Actress in a Musical:  Audra McDonald’s co-nominees are Jan Maxwell (“Follies”), Cristin Milioti (“Once”), Kelli O’Hara (“Nice Work…”) and Laura Osnes (the early-season flop “Bonnie and Clyde”).  This is McDonald’s fifth Tony nomination; she won the other four as Featured Actress.  Come June 10, she’ll be five-for-five, getting her due as Leading Actress.

Featured Actor and Actress in a Play:  Among the season’s new plays and revivals, there are a score or more of standout performances in supporting roles.  Among the best are Andrew Garfield as Biff in “Death of a Salesman” and Spencer Kayden as the madcap cook in “Don’t Dress for Dinner,” both of them likely winners. (A pair of “if I’m wrong” contenders: Michael Cumpsty as Judy Garland’s loyal accompanist in “Rainbow” and Linda Emond as Linda Loman in “Salesman.”)

Featured Actor and Actress in a Musical:  Again, more opportunity here than in leading roles, and a high overall quality of work. Michael Cerveris is the one truly immersed performer in “Evita” (as Juan Peron), and Judy Kaye has her way with an energetic drunken song-and-dance in “Nice Work If You Can Get It.”  Besides their worthy performances, they’re both Broadway-veteran favorites.

Best Direction of a Play:  Mike Nichols has won more play-director Tonys than anyone else, with five. Figure on number six this year, for “Death of a Salesman.”  Best Direction of a Musical might be the most difficult prediction.  Commonly, the award goes to the director of the Best Musical, and John Tiffany (“Once”) must be considered a favorite.  But he’s not a shoo-in.  The storm of controversy that swirled around Diane Paulus’s ‘alterations’ to “Porgy and Bess,” stoked by a reprimand from the vaunted Stephen Sondheim, created a pro-Paulus backlash.  My personal choice would be Mr. Tiffany; my prediction is Ms. Paulus.