“This, after all, is theatre.” – Alan Ayckbourn

If it’s true, as claimed, that Alan Ayckbourn is the second most performed playwright after Shakespeare, it’s only fair to point out that he has written (so far) exactly twice as many plays, 76, to Will’s 38. (Okay, depending on how you count.)  Most of Ayckbourn’s plays illuminate the lifestyles of upper-middle class Brits; many of them center on marital problems within that social strata.  None captures those elements in a more entertaining – or more unusual – way than does My Wonderful Day.

The leading role in My Wonderful Day has the fewest lines in the play, which runs through June 3 at Two River Theater in Red Bank.  She’s nine-year old Winnie Barnstairs, played here by two-times-or-more-older Susan Heyward. How good is Heyward in the role? She’s so good that the five other actors – and the whole play – are all better for her performance. 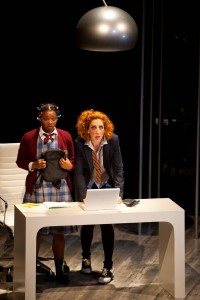 Off from school with a minor ailment, Winnie has accompanied her single, late-stage pregnant mom (Kimberly Hebert Gregory) to her job as house cleaner for minor TV performer/producer Kevin Tate (Marc Vietor).  Winnie plops down on the sofa and commences to write her school-assigned essay on “My Wonderful Day.”

How much private info will people reveal in the presence of an unobtrusive child or someone of any age who they believe doesn’t speak their language?  By virtue of her Martinique-born mother’s decree making Tuesday speak-French day, Winnie is both.  (“There’s no one here…nobody!” Kevin insists into the phone with Winnie sitting right there. Point made.)

The first to fall under Winnie’s spell is Tiffany, Kevin’s, um, secretary – a chatty reed of a creature played to the daffy hilt by Alison Cimmet, who opens up to the girl about her own unhappy boarding school days.  We hear as Tiff and Winnie watch Kevin’s latest DVD, which suddenly cuts to Kevin’s wife Paula, who reveals Kevin and Tiffany’s affair in no uncertain terms.   Cue some tears (Tiffany’s), anger (Kevin’s) and wide-eyed wonderment (Winnie’s).

Then Kevin’s friend Josh (Kevin Isola), who, believing that Winnie does not understand English, SPEAKS LOUD to her and performs a terrible coin trick before opening up about his fractured relationship with his own young daughter.  Reduced to tears, he falls asleep while Winnie reads to him from The Secret Garden (in English). 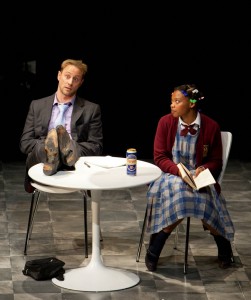 The farce continues through Laverne’s water breaking all over the precious couch and the arrival of Paula (Danielle Skraastad) while Kevin and Tiffany are upstairs taking, um, dictation.

All of the above is experienced through the sensibilities of Winnie, and under the astute direction of Nicholas Martin, it all comes across with a childlike veneer.  It’s not over-acted by any means, but the adults do approach caricature – as intended, I hasten to say.  On Cameron Anderson’s modern, spare living-dining area combo set, they’re all excellent.  (I don’t remember from off-Broadway if Tiffany had a habit of slapping her own face, but if not, Ms. Cimmet’s execution should make it permanent.)

Ayckbourn’s original-script casting note is instructive:  “Either [Winnie] needs to be played by a young actor of a similar age” which he thought could be problematic, “or by a slightly older actor who is able to create a truthful and credible impression of the character’s age.  Winnie is a child and the play is told through a child’s eyes.”

‘Truth’ and ‘credibility’ have never been better served than here.  My Wonderful Day is Winnie’s play, and Ms. Heyward is a wonder.  “This, after all,” Mr. Ayckbourn concluded, “is theatre.”  Indeed it is.

Don’t miss: The off-Broadway incarnation of “Million Dollar Quartet” will close on Sunday, June 24 at New World Stages, 340 West 50th Street, NYC.  The show is a recreation of the December 4, 1956 meeting of Johnny Cash, Jerry Lee Lewis, Carl Perkins and Elvis Presley in the Sun Records studio in Memphis, where the four produced one of rock’s legendary jam sessions. 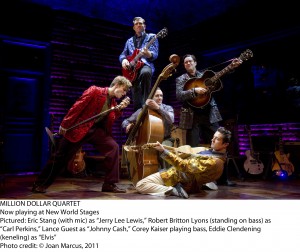 Million $$ Quartet plus one - jammin'

“Million Dollar Quartet” opened on Broadway April 11, 2010 and transferred to New World Stages on July 28, 2011.  Like its fellow transferee to off-B’way, “Avenue Q” (also to New World Stages), “Million $$” is every bit as good in a half-size auditorium.  All tickets are $89.50, and lower by about half at same-day TKTS in Times Square, where I’ve seen the show offered even on weekends.