“Once on This Island” Closes Paper Mill Season

Paper Mill Playhouse is closing its 2011-12 season with more of a whimper than a bang.  The 90-minute musical Once on This Island opened off-Broadway in May of 1990 and moved to Broadway that fall. To describe the show as ‘unpretentious’ is as much a curse as a blessing.  The music, by Stephen Flaherty, is undistinguished, and the story, told mostly through Lynn Ahrens’s lyrics, is simplicity itself.  (Flaherty and Ahrens are best known for Ragtime and the Seussical musical.)

The show must have resonated with some folks, however, because it ran over a year on Broadway and was nominated for eight Tony Awards (winning none).  Paper Mill’s run is through June 24, which should accommodate all the New Jersey folks who want to see it.

Adam Jacobs and Syesha Mercado, foreground, and cast of "Once on This Island"

Once on This Island is a story within a story, told to calm a young girl during a storm.   Set on a French Antilles island where class differences prevail, it’s a fable about a peasant girl plucked from just such a storm by the gods and sheltered in a tree.  Ti Moune (Syesha Mercado) grows into a lovely young woman who rescues the mulatto son of a wealthy landowner, Daniel (Adam Jacobs), after he’s been hurt in an automobile accident.

Predictably, Ti Moune falls in love with Daniel and pledges her life in exchange for his.  During his recuperation they co-habit in his family’s gated manor, which scandalizes the populace.  When he rejects her love to (spoiler alert) marry another, the gods rescue Ti Moune from the Demon of Death and give her eternal life by turning her into a tree.  (She goes from up a tree, to, well, up a tree.)

It’s a harmless myth, to be sure, but one with little drama, less humor and a leading man who’s comatose for the first half of the play, a condition that this Daniel only partially alleviates in the second half. 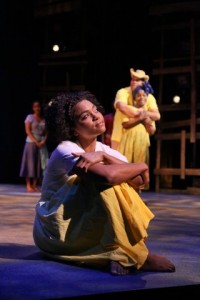 Ms. Mercado, an “American Idol” runner-up, has a lovely presence and a more-than-passable singing voice, but she’s not up to carrying a show that sorely needs a strong emotional center if it’s to come across as anything more than a tweener-appeal romance. Most of the others play multiple roles, evoking both the happy native-natives and the haughty French-natives, the latter with the aid of masks held at their faces.

Andrea (Courtney Reed), the girl Daniel dumps Ti Moune for, is perfection.  She’s affectionate, gracious and quite beautiful. This Ti Moune is clearly overmatched by this Andrea.

Director Thomas Kail keeps things moving; Bradley Rapier’s choreography, while repetitious, has its moments; and Musical director Lynne Shankel’s smallish (for Paper Mill) orchestra is pleasant enough.  All told, however, there’s only so much that can be done with Once on This Island…and that’s just how much Paper Mill does with it.

Through June 24 at Paper Mill Playhouse, Millburn, NJ. Performances Wednesday thru Sunday with single tickets from $25.  For information and reservations: 973-376-4343 or online at www.papermill.org